What Is It About Symmetry?

on March 03, 2021
*I have prepared this post to serve as my slide show for a Zoom workshop, so it is a little different from my usual posts. On the other hand, I haven't posted in ages, so what consists of "usual" these days?" *
Why are we humans so attracted to symmetry? Studies show that we find faces that are very symmetrical more beautiful than asymmetrical faces. Classical architecture tends to be very balanced and symmetrical. We are surrounded by things, both natural and manufactured, that are basically symmetrical.
Symmetry implies balance, stability, a solid foundation. It reassures us that our world is in order: calm, unchanging, not going to fall over anytime soon.
Our bodies are also (more or less) symmetrical. This is a result of cell division as we develop as embryos, and a manifestation of deep biological order of life on Earth. We relate to symmetry on a cellular level.
Symmetry is one of the principles of design. 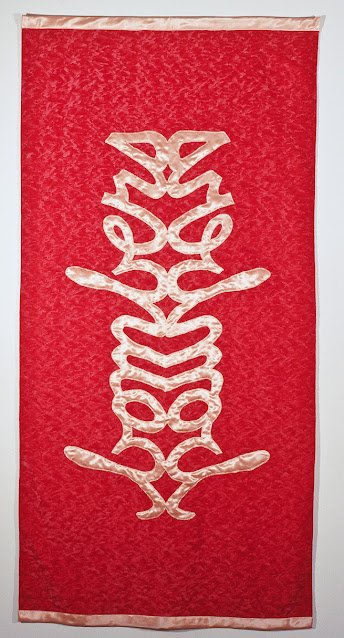 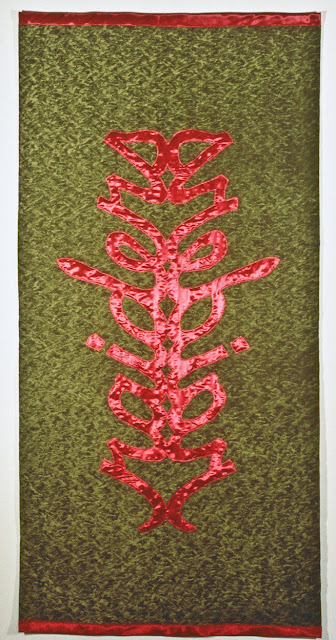 Above are two panels from my series "Applied Forces", created for the 1995 Grey Cup. Hosted by the city of Regina, where I lived at the time, artists were hired to place work in vacant downtown windows, a sort of civic sprucing up. I created six large banners, of luxurious satin appliqués on crushed velvet.
Look closely at the forms. Some see alien life forms. Others see totemic figures. They are very symmetrical. 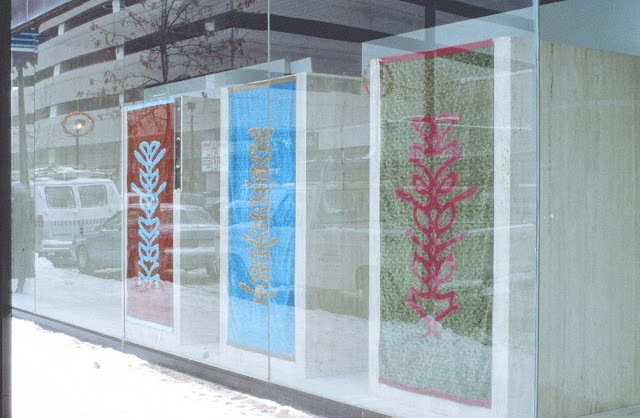 They are actually derived from words, archetypal team names like marauders, vandals, and barbarians, using an old elementary art class trick: writing a word on a piece of paper, folding the paper along the bottom of the letters, and tracing the word out. Unfolded, they become magical creatures, liberated from the constraints of schoolroom cursive. It comes as no surprise that our alphabet is derived from animal forms - our connection to all life imbedded in words, text, story. 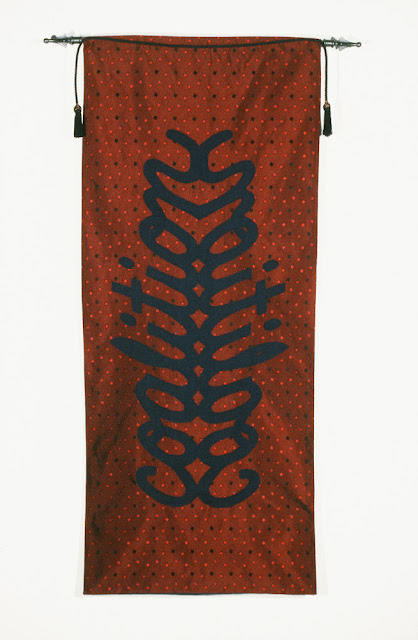 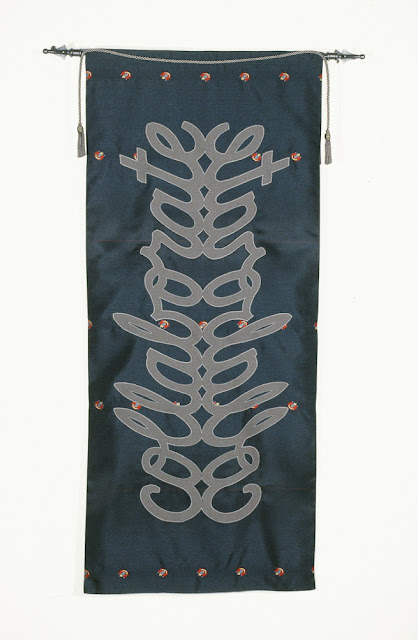 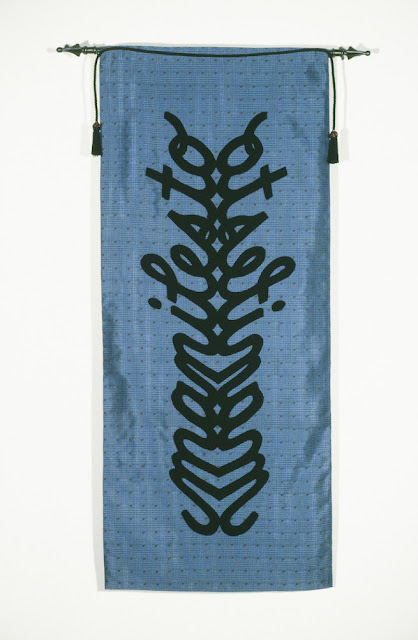 The series "Applied Forces" was purchased by the city's Dunlop Art Gallery. This success, and the discovery of a warehouse full of fabrics leftover from a necktie manufacturer, led me to another series, "Robes of Power". Using the same technique, I cut words relating to politics, the idea of two sides in relationship, out of fine wool suiting material, and appliquéd the forms to shiny silks with little crests, checks and stripes woven in. Fittingly, this series of eight panels was bought by the Saskatchewan Arts Board, available for display in ministerial offices. 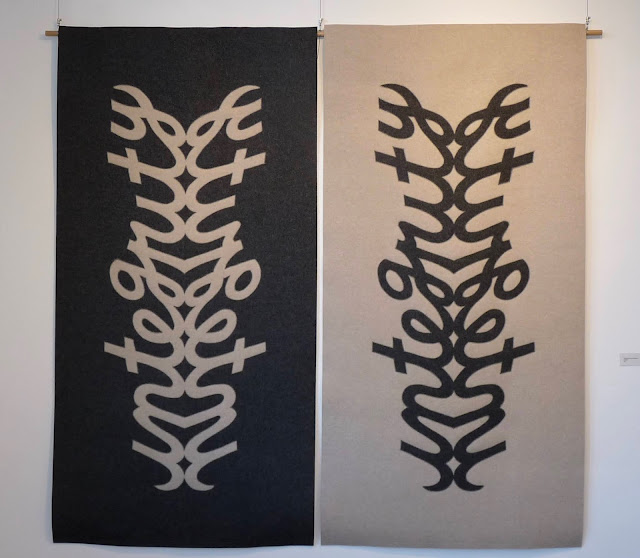 Years later, in 2020, I returned to this idea of symmetrical text forms in response to my concern over the  state of the world. I felt adrift in a miasma of dishonesty, double-speak and corruption from our politicians, and afraid for the fate of the planet. I needed stability and hope. I chose the word "integrity" which means wholeness, truth, and interconnectedness. My materials and techniques this time were quite different - I used 100% wool felt, 3mm thick, and actually cut out my pattern through two layers with an X-Acto knife. These layers were then switched out with each other, and I stitched them together (10,000 stitches!) by hand, creating two whole panels. 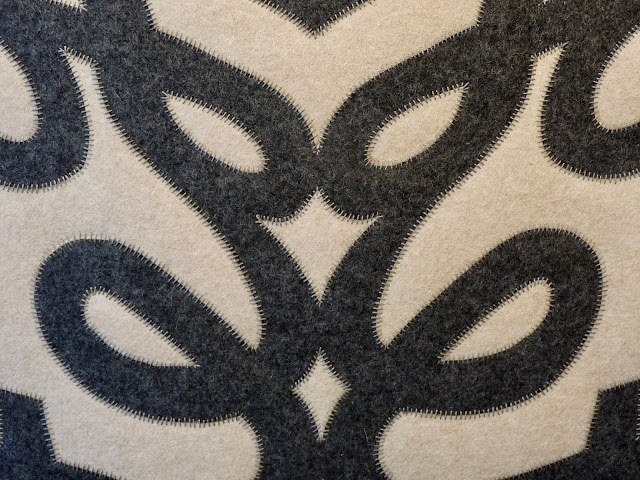 This technique was inspired by the traditional felt inlay makers of Kyrgyzstan, who fold wool felt and cut through the layers, freehand, with scissors. They create amazing rugs, saddle blankets, and other goods using this method. A lovely video can be found here. 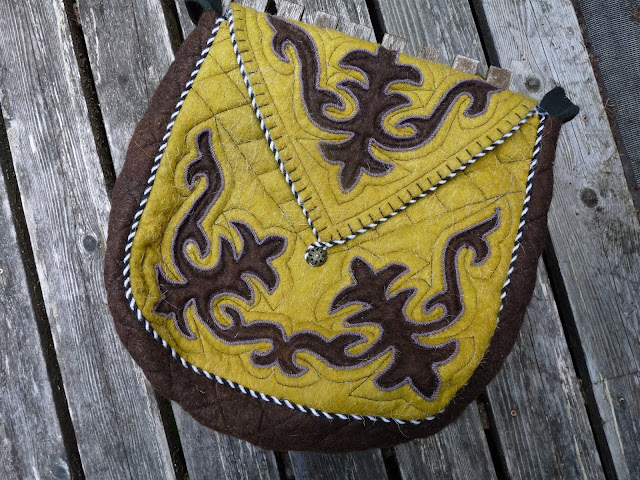 A Kyrgyz bag. Note the symmetry! 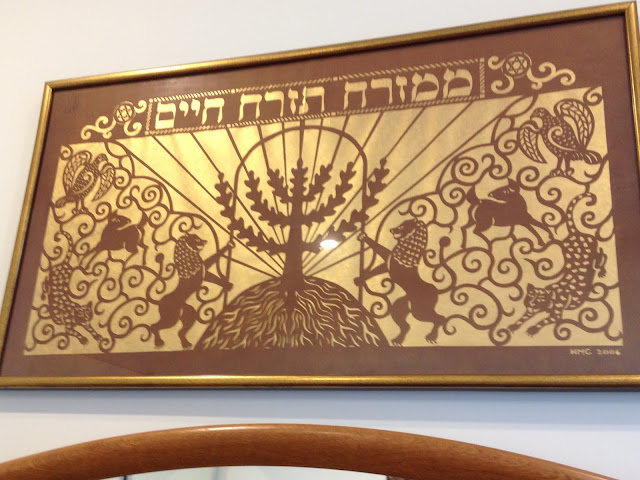 My second to last example is a piece I made for my uncle, who converted to Judaism. It has a traditional function, placed on an east wall, denoting the direction of Jerusalem. This piece is cut from paper, again folded in half to create a symmetrical design. Only the Hebrew letters were cut flat. I backed the dark brown paper with a gold Japanese paper. Cutting through two layers on a fold has advantages - half the labour, and perfect symmetry. I wrote more about it here. 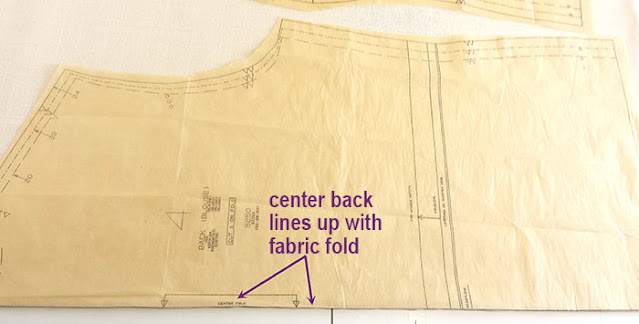 And we return to the human body with my last example. The simple sewing pattern tissue is actually a work of practical genius. To make our clothing, time and labour are conserved by cutting on a fold, again ensuring perfect symmetry. So perfect, in fact, that we may need to tweak and tuck a bit here and there to fit our slightly out of alignment bodies, but with the goal of creating the effect of balance, stability, and bilateral symmetry.
"It is the harmony of the diverse parts, their symmetry, their happy balance; in a word it is all that introduces order, all that gives unity, that permits us to see clearly and to comprehend at once both the ensemble and the details." ~ Henri Poincare
"Reality is partial to symmetry and slight anachronisms." ~ Jorge Luis Borges
design technique

Thirteen years ago, almost to the day, I had a big scary bike accident that resulted in a broken C1 and T 6, 7, 8, amongst other injuries. After a long period of recuperation, which gave me a great deal of time to ponder about chance, fate, and infinity, I made a few pieces of art. Above is Fate (2008), 20x20, and you can find out  more here . It has gone off to live in France. I can't remember if I made this one first, but is is also from 2008, titled Infinity and measures 15"x52". The line came from a book about Middle Eastern rug design, wherein the central field represents a garden that stretches into infinity. Because it is infinite, sometimes the design is arbitrarily cut off to fit the width of the warp, resulting in asymmetry. Production notes  here.  It hangs above my sewing table. A year later I made this piece, the title of which I cannot remember, with text from Dag Hammarskjold, the second Secretary-General of the U.N., who was killed in a suspicious plane

Actual size of this piece of lichen is about 10 inches across. Let me introduce you to Lobaria pulmonaria , the Queen of Lichens. This distinctive beauty can often be found on the ground at this time of year, blown down from her home high up in the maples. The bright lime green of the underside stands out amongst the rusts, oranges and golds of the fallen leaves. Lobaria pulmonaria was traditionally used by the Coast Salish people as a dye for wool. I was first told about this excellent dyestuff by Katherine Tye , an amazing Fraser Valley woman who was involved in the revitalization of spinning, weaving and natural dyeing amongst the First Nations communities in that region, back in the early 1970's. I met Katherine as part of my research into dyeing with native plants that I was doing for a high school science project. (She now has an ecological reserve named after her.) Lobaria pulmonaria does not require any mordants to give up a lovely, fast, orange-y tan colour on 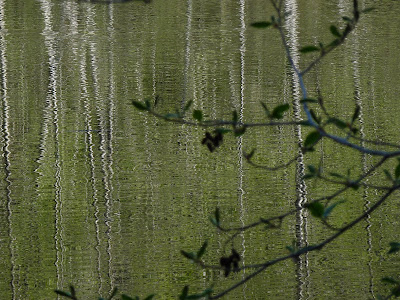 For the first couple of weeks of this pandemic business, I was perfectly happy. As an introvert, not having to interact with people felt like the sudden lifting of a burden I didn't realize I was carrying. As an artist, I am used to working in solitude. A long stretch of sunny spring days: finally, my ideal world! As government and health officials imposed increasing levels of social and physical distancing, though, things started to get weird. My fellow citizens in this small island community displayed wildly varying levels of paranoia, fear and nonchalance. I came face-to-face with this as my part-time job, in a liquor store, was deemed an essential service. The minimum wage job that I could shrug off and forget when I locked the door at night began to demand more psychic energy. Customers, some eager to have a captive ear, shared their worries. Even the ones who opted for minimal interaction revealed their anxiety by covering their faces and hands, and moving