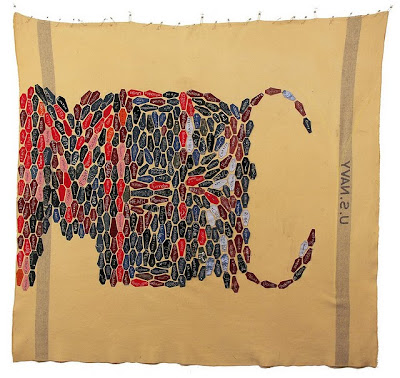 This weekend, I participated in the Veteran's Day Sewing Circle, a project created by Sherri Lynn Wood. (The photo above belongs to her.) I used to actively participate in the peace movement, but became discouraged and cynical, particularly since 2001. For the last nine years I have felt that any efforts of protest that I could make would be meaningless. Sherri's project is the first thing I have seen in a long time that spoke to me. Simply, names of U.S. soldiers killed in the Iraq war, as well as those of Iraqi civilians killed during the same conflict, are embroidered on coffin shaped patches, which are then assembled into memorial banners. 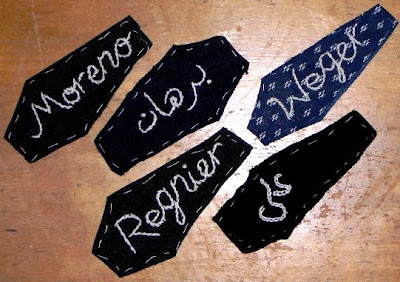 These were my patches. Sherri supplied the pre-cut cloth, embroidery floss and five names. The Iraqi names were in Arabic. I embroidered them in an afternoon, freehand. It was a good time to reflect on what my contribution might mean to the families of who died. Although seeing their loved one's name on a little scrap of cloth is infinitely small compensation for the loss of that person, perhaps knowing that strangers care helps just a bit. As a Canadian, whose country did not participate in that war, I felt sorrow for the young lives that had been lost, and renewed anger at the stupid, criminal futility of war.

In the 1990's, another Canadian, Barbara Todd, created an amazing series of quilts on the theme of militarism. She was one of my big influences while I was at art school. Below is Coffin Quilt. 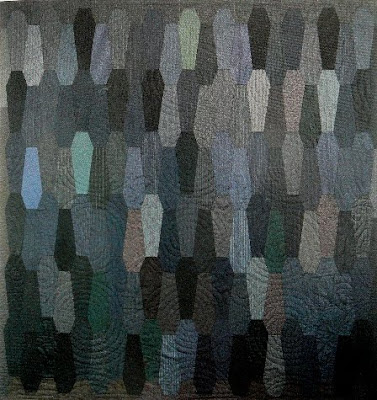 And this is a detail from one of the pieces in her Security Blanket series, which incorporated images of missiles, weapons, jets, and bombers. I wish I could find more images and information for you, but a quick Google search didn't come up with much. Try the collection of the Saskatchewan Art Council and Barbara Todd's gallery. 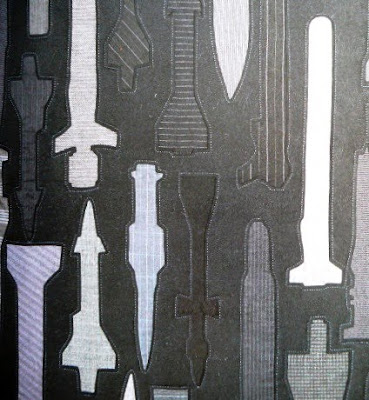