on December 17, 2018
Well, rather than a bunch of excuses (or, as I prefer to call them, reasons) for my absence, I will show you what I am working on. I thought I was done with Codex Canadensis imagery, but then I came across this image in a book about trees. 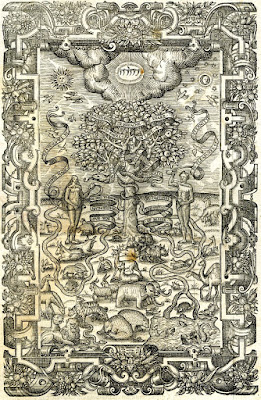 It was attributed to Christopher Barker, who drew the image in 1586 as the frontispiece for an edition of the Bible. Look at all those critters! Of course it would be wonderful to replace them with Louis Nicolas' Creatures of the New World. And so I did. 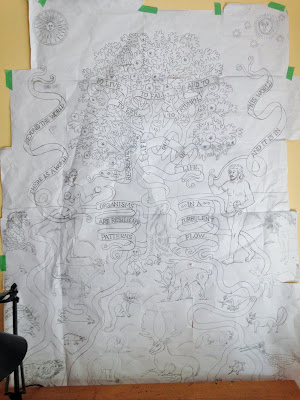 It took a bit of re-working to come up with the design. I enlarged the Barker image to about 800%, and fiddled with and resized the Codex critters to fit. (I was able to find replacements for almost all, except the elephant and the camel.) I replaced the text on the banderols (scrollwork) with three quotes: one from James Joyce, that was encoded into the first synthetic bacteria DNA (To live, to err, to fall, to triumph, and to re-create life out of life), another from microbiologist Carl Woese (Organisms are resilient patterns in a turbulent flow), and a third from surrealist poet Paul Eluard (There is a world beyond the world, and it is in this world). 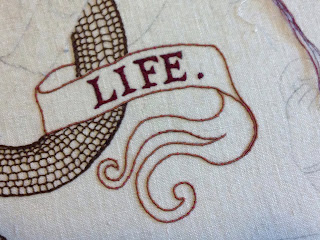 I transferred the design to a beautiful piece of linen that was grown, spun and woven in India, bought from Capiscum, a gorgeous and inspirational fabric store in Amsterdam. I began stitching. 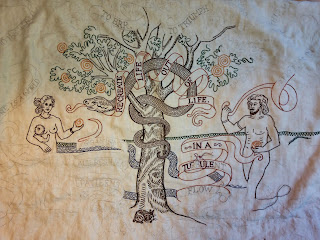 Finding suitable figures for Adam and Eve was tricky. If I used Louis Nicolas' temptingly elaborate figures from the Codex, I might be accused of perpetuating racist stereotypes. Barker's figures were just too weird and pinheaded. So I went with Samuel de Champlain's depiction of indigenous people on his 1612 map of the new world. They look rather European, and aristocratic, but hopefully once the animals are in place, they will recede into the background. 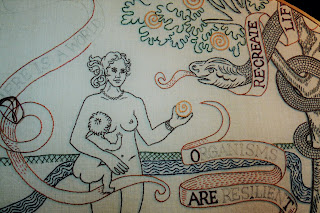 I also had to decide how to depict the infamous fruit, after my initial effort lacked presence. Since there were a whole lot of curlicues happening in the design anyway, I went with a spiral that didn't resemble any earthly fruit, yet seemed full of energy and potential.

With the thin, weak light these days, I can't get much done - about 3 or 4 hours a day. And I keep making decisions that require more stitches, like the shading in the banderols. I figure another four months and I will be done, but that's a loose goal. Like Lao Tsu said: "A good traveler has no fixed plans, and is not intent on arriving."
codex canadensis creative process embroidery