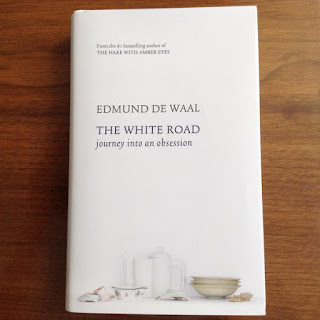 I am midway through a ravishing read: Edmund de Waal's "The White Road." Oh, if only I could write as eloquently as he does - I recognized so much of my own passion about the Codex Canadensis project in de Waal's obsession with porcelain. I have recommended this book to everyone I meet, gushing: "It's all about white, believe it or not, and the most fascinating book I have encountered in goodness knows how long!"

I was surprised to find reviews ( i.e. from the Guardian and the Globe and Mail to reference a couple of the more positive ones) were somewhat ambivalent. But then again, those reviews were for a general audience. I think what de Waal does so brilliantly is actually capture the approach of an artist who thinks deeply about materials and process, and has spent a lifetime learning, developing and refining that approach. This book will resonate with artists and craftspeople in particular - anyone who has not devoted a good chunk of their life to making things may be bored stiff, and wonder what all the fuss is about.

You might imagine my delight when it turned out the first section of the book features a French Jesuit missionary, Pere d'Entrecolles, who traveled to China 300 years ago! A contemporary of my dear Louis Nicolas! And there is much to be learned in the comparison.


"The imperative to write was central to the Jesuit's mission... .Writing was an act of self-reflection, a catechising of yourself before God... . You are God's spy abroad in a new world. You are a witness. Write it down. Write it down with exactitude."

d'Entrecolles appears to be a much mellower and more diplomatic missionary than Nicolas, though. He ended up staying in China for the rest of  his life, converting souls, but mostly researching Chinese porcelain production. de Waal brings d'Entrecolles to life by retracing his path through modern-day China, guided by a photocopy of the Jesuit's original notes. He mixes past and present as a metaphor to illustrate the transcendent beauty, lightness and fragility of porcelain, and its enduring ability to enchant through the centuries.

This book has bolstered my faith in my own work, and offers renewed inspiration. I would recommend it to anyone who is interested in how things come into being, both philosophically and materially; who loves lush, poetically elegant writing; and/or who makes things themselves.
book reviews codex canadensis creative process Louis Nicolas