Nothing to be Alarmed About, But... 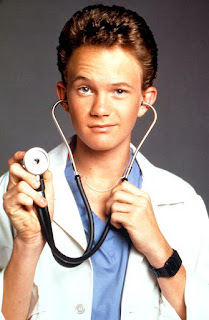 I am officially as old as dirt. I got the black flag* yesterday at 1:25 p.m., while meeting the doctor who was filling in for my regular doctor. He was young, but then they all seem young now. His last name was common in the small town in which I grew up, so I commented on that. He said that is where his family is from. Banal chit chat, right?

But suddenly, out of left field, I realised this kid was probably the grandson of people I had gone to school with. No, wait - given the early age at which they married in that community, he could even be, is it possible, a great-grandson?

I'm 56. I'm out of the race. The body work is loose, and the bumper is definitely dragging.*
Thank God! Now maybe I can get some work done!

*Wikipedia says: The solid black flag is used to summon a driver to the pits. It is usually associated with a penalty imposed on the driver for disobeying the rules, but may also be used when a car is suffering a mechanical failure, leaking fluid, exhibiting damage such as loose bodywork, loose hood, dragging bumper, or any other damage that could potentially become a hazard to the driver or other competitors.
completely not related to anything textile