A Skin for a Skin 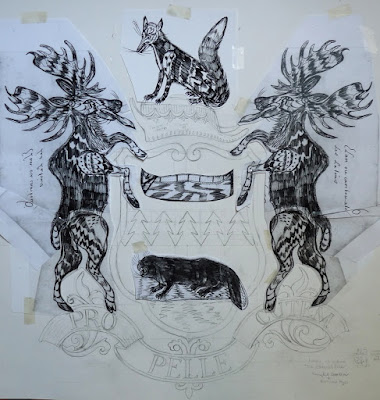 At times like this I feel like a six-year-old who just has to show Mom her latest creation. I finished the mock up for the next piece of embroidery, and even though it's very rough, I wanted to show you. It's a pastiche of the Hudson's Bay Coat of Arms. The venerable Canadian Hudson's Bay company was incorporated in 1670, just when Louis Nicolas was in the New World, and was a primary force of territorial expansion and colonialism, and the beginning of the ongoing exploitation of this land's natural resources. Basically, the reason Canada came into existence is because there was a huge craze in Europe for men's hats made from felted beaver fur. 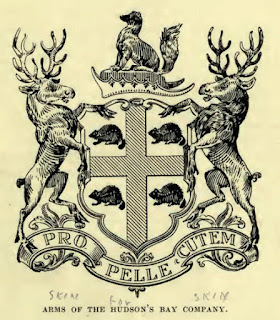 Whoever designed the original coats of arms had never seen an elk, which is what the rampant creatures on each side are supposed to be. Just like Louis Nicolas did, they were drawn from a book of engravings (Gesner), and were the closest thing to what an elk might look like, according to verbal descriptions received from someone who might have actually seen a real creature, or heard about it from someone else. That's the way it was done before cameras.

The motto "Pro Pelle Cutem" means "a skin for a skin", and according to the Canadian Encyclopedia, means an (animal) skin obtained at the cost of (human) skin. The late 1670's were blood thirsty times. European expansion into the New World decimated aboriginal populations.
And, as I go farther down the rabbit hole, I learn that the shape of a coat of arms is based on an animal pelt. Apparently it was the Egyptians who first hoisted a stretched skin as an emblem to lead them into battle, but I wouldn't be surprised if the practise goes back farther than that. A coat of arms is a shield, a protective device, a symbol that ties us to our earliest ancestors.

In my version of the HBC Coat of Arms, I have done quite a bit of manipulation of Louis Nicolas' original drawings to create my design. The fox on top is reversed, as is the beaver, and the elks' hind legs were rotated 90 degrees to make them rampant. I have changed the field of the escutcheon (all these heraldic terms I am learning) to include a single beaver and a canoe, and changed the cross to a fir tree dividing line.

Now I just have to trace the main lines of the paste up and enlarge that by 200%. That will make the finished image about 48" by 52". I can't wait to get started!
codex canadensis creative process design technique embroidery Louis Nicolas