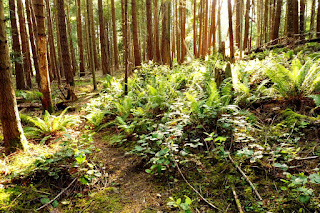 Frederick Law Olmsted, the great landscape architect, had the idea that the ideal path should curve gently up and around, so that the destination is not seen, but instead evoking a sense of mystery and discovery as one walks along. If the path is well-designed, the person walking should feel no conscious effort - all the better to relax and withdraw from the hustle and bustle of the city beyond the park walls.

I am lucky to live in a place where I can find paths through the forest almost at my doorstep. With dogs, the need for safe, stimulating places to sniff and explore and be their natural selves is important, and Gracie, Mischa and I make forays into the woods every day. In the forest, I feel sheltered and protected, and am often awestruck by the beauty of my surroundings. The paths are my guides (although I have been known to take detours down deer tracks, just for fun) and a reminder that others have walked here before me.

James on the other hand, is a city guy and feels very uncomfortable in the forest. "What if I trip on a root?" he says. "What if a tree falls and crushes me?" It's hard for me to understand his worry.

I used to live in the Kootenays, in southeastern British Columbia. I had two dogs then, too, and we would regularly go for hours long walks up remote old logging roads, finding trails that would take us to alpine meadows. I never fretted about getting lost, even without a map, since I knew that all the paths would eventually lead either to the lake or a stream, which then led to the lake, and once I was at the lake I could find my way home. I had occasional encounters with moose or bears (who really are shy animals) as the the dogs kept me safe. But only once or twice did I see another human.

I think back to my childhood, riding my bike to school, how I would always veer off the road to take a path if I could. Even if it only paralleled the road for a short way, the path was always more intriguing.

While walking this morning, it occurred to me that I am definitely an off-the-beaten-track sort of person. I have never taken the predictable route. I think this has been very important in my creative work. Ideas will find me as I walk, and often lead me to places of discovery and revelation. I may not know where I am going, but it is usually interesting getting there. And a regular practise of being in unfamiliar surroundings means I am less afraid of going to places I haven't been before, both literally and metaphorically.

Sometimes finding the path isn't easy. I have to look for the faint mossy track in the space between ferns and salal. I have to rely more on animal instinct, be aware of the trampled leaves and broken twigs. But, always, there is a path. I'm not the only one who likes to take an alternative route.