on November 28, 2014
Sima Elizabeth Shefrin is my guest artist for the Round the World Blog Hop. We're bending the rules a little bit as, even though Elizabeth has a had a couple of websites for several years now, she has only just started a blog, and we are having some technical difficulties. So I am happy to introduce Elizabeth to you here, and hope that you will visit her websites to see more of her socially conscious work.

Elizabeth says:
I’m a fabric artist, a community artist and a children’s book illustrator, and have been for many years. My main website is called Stitching For Social Change and my other web site is called Middle East Peace Quilt. The titles alone should give you an idea of the kind of projects I enjoy. 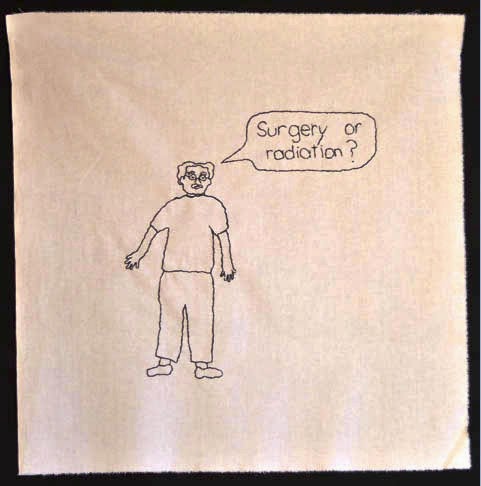 Right now I’m working on two major projects. The Embroidered Cancer Comic Book will consist of fabric wall panels and accompanying comic books, depicting my husband’s and my journey following his prostate cancer diagnosis in 2011. My plan is to create 16 to 20 fabric comic strips each consisting of four 20 inch square embroidered line drawings. These will be sewn together in panels of four. 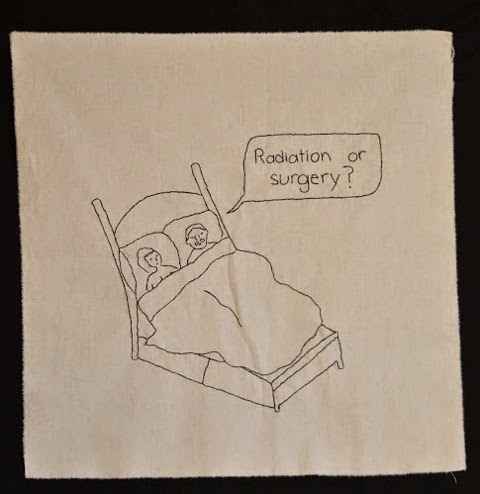 The second project is called Jews and Arabs Refuse to be Enemies, and is inspired by a face book page with the same name.  On this page, members of the Face Book community post pictures of themselves holding signs, with the name of the site handwritten on them. The people in the photos pose, Jews with Arabs, Israelis with Palestinians, sometimes in couples, sometimes family groups, or groups of friends, individuals who are stereotypically in conflict with each other.
I am creating fabric applique and embroidered portraits from the self-portraits people have sent to the site. If you live in Vancouver check out the 2015 cover of the program guide for the Roundhouse Community Centre as soon as it’s available. 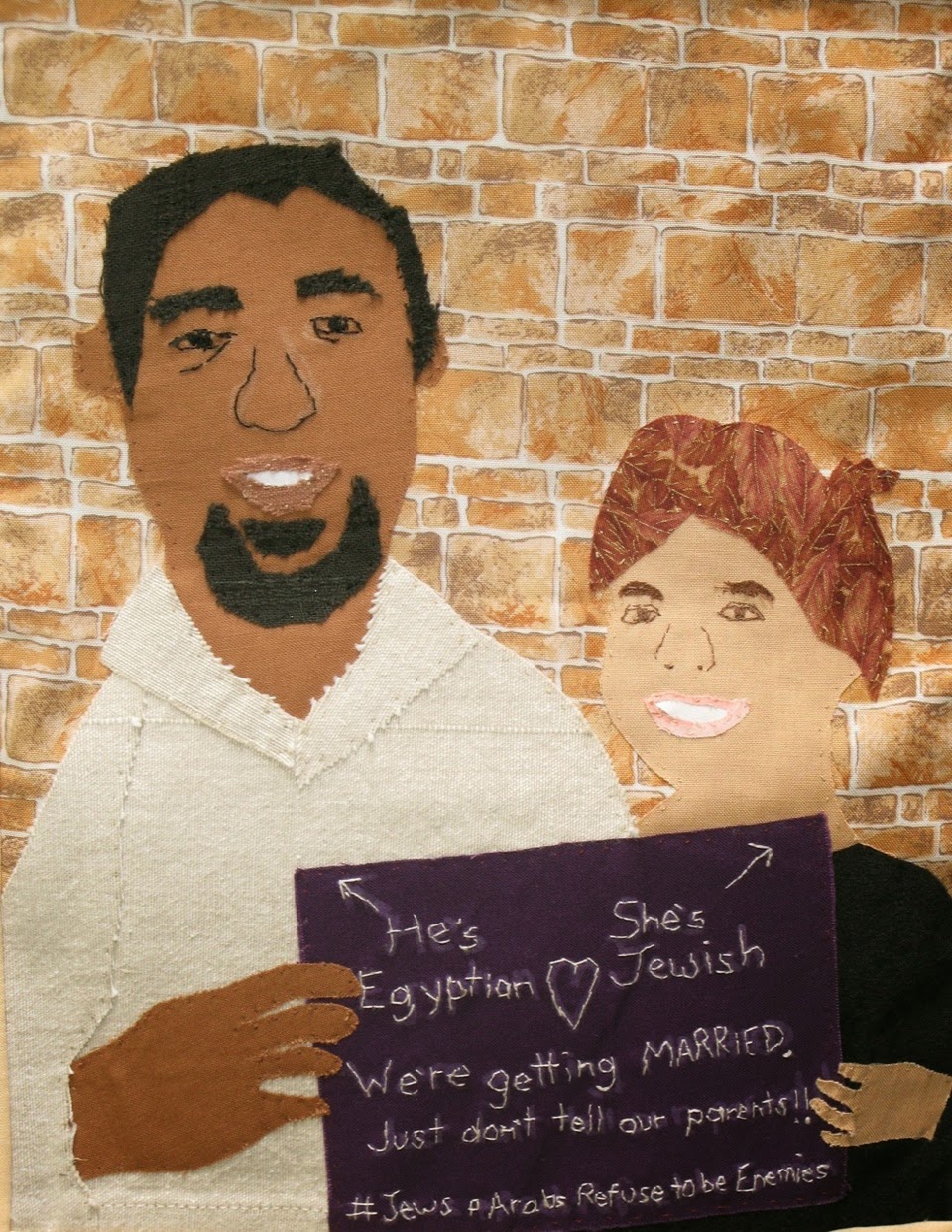 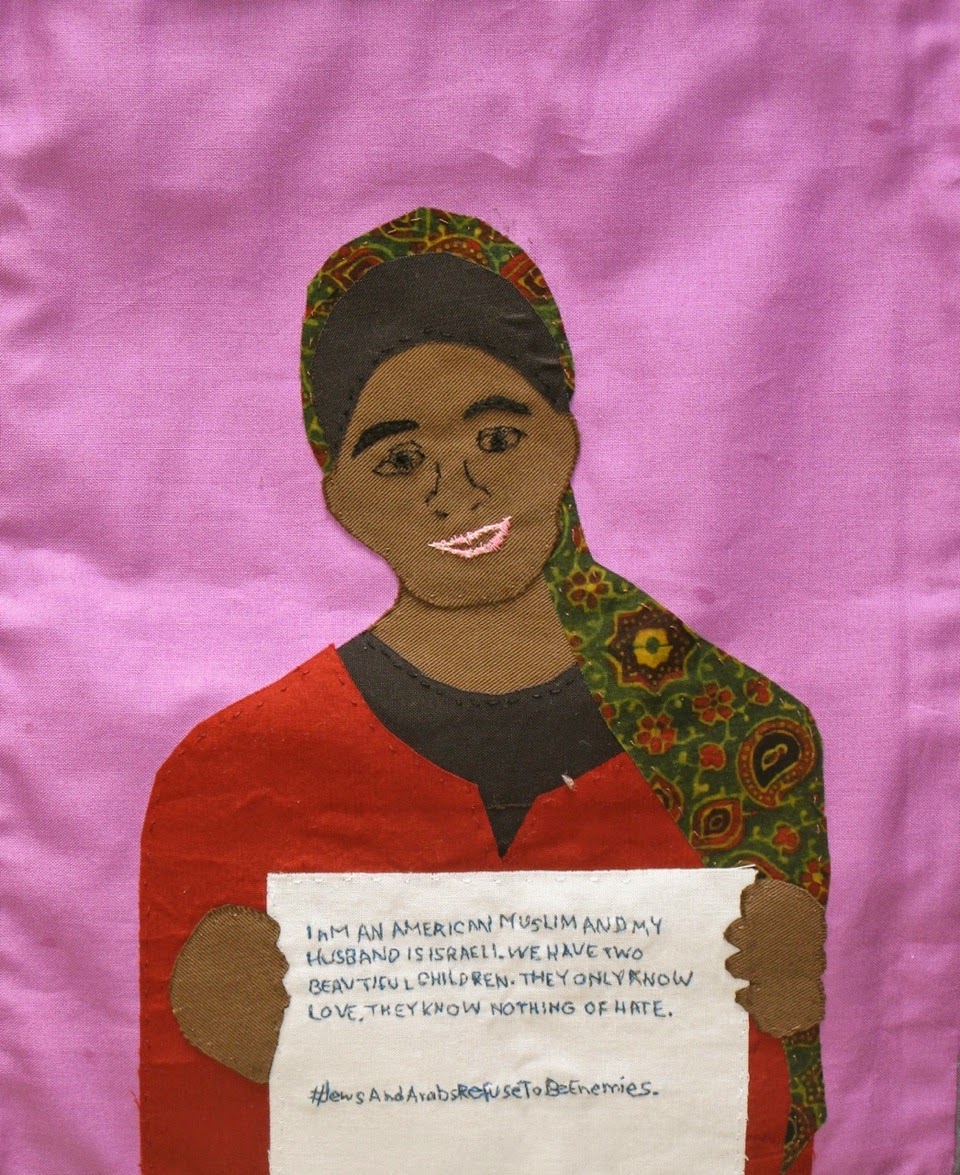 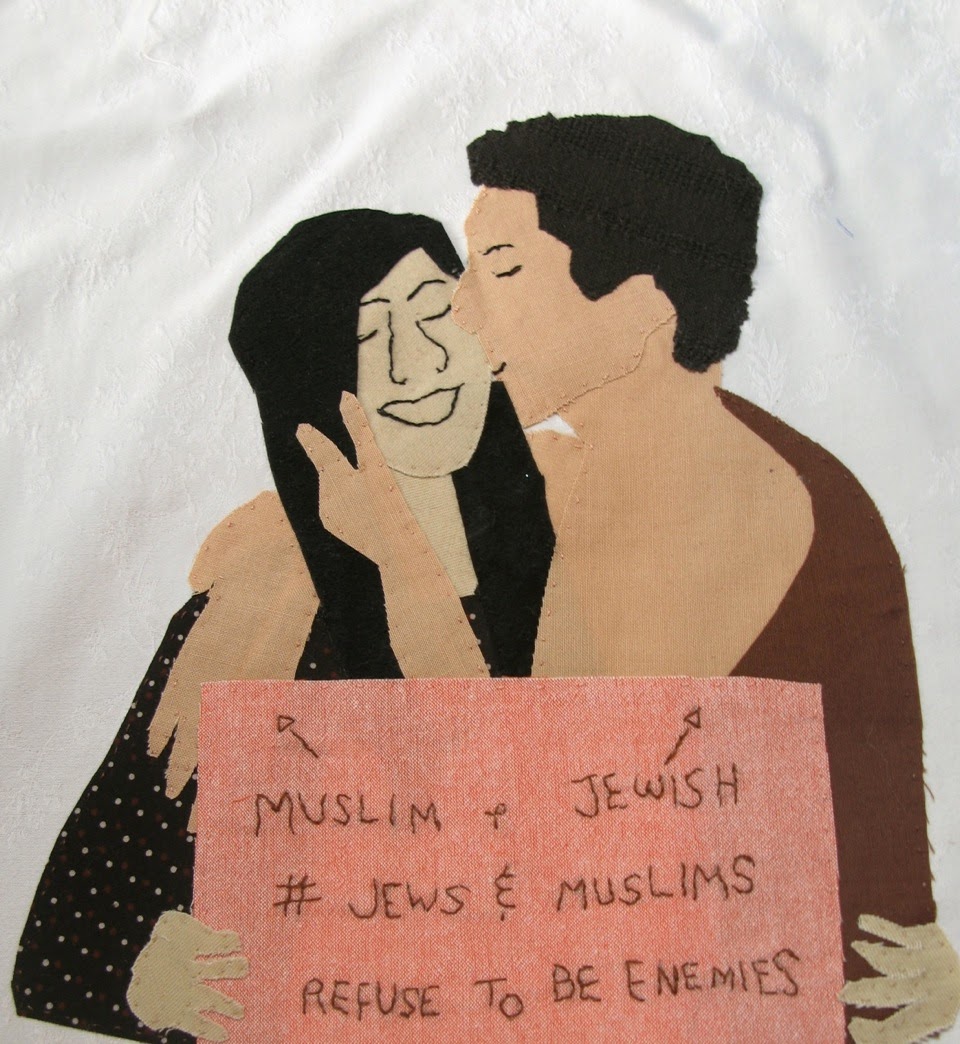 I love working in fabric and I love working with my hands. I get antsy if I don’t have a project on the go. One of the great things about fabric art is that as a traditional women’s art form, it is largely outside of the male-dominated western European art forms.
I am storyteller and an activist, and the work I create tells my stories. I particularly like it when an art form can build bridges between peoples, or help create a better world.

I have almost no formal training as an artist, and I tend to make things up my process as I go along. For the Embroidered Cancer Comic images I work from small sketches which I enlarge on the photocopier and trace onto fabric. For the Jews and Arabs pieces I trace the photos people have posted on the Face Book page and enlarge the tracings to make pattern pieces. The most fun part is embroidering the faces which I do by looking at them very carefully.  Truth to tell, I’m less interested in them looking like the photo and more interested in them having an integrity of their own.

I am trying to get my blog page going but I’m having some technical difficulties, so thank you to Heather Cameron for letting me post on hers. In the meantime please write to me through either one of my websites. I’d love to hear from you.
Find me here:
http://www.middleeastpeacequilt.ca/
http://www.stitchingforsocialchange.ca/
activism friends inspiration