A Tale of Two Tapestries

on June 22, 2014
My Mom's friend Edith died recently. She was able to live in her own home, here on Gabriola, almost up to the very end, surrounded by the art and books she loved. Every piece had a story - Edith would recount how she came by each artwork in her delightful Dutch accent, filling in all kinds of details about the circumstances in which she knew the artist, even sometimes giving a little kiss to the work.

Her bedroom was filled with textiles - a Chilean arpillera, some of her own excellent cross-stitch pieces, her daughter Saskia's tapestry weaving from art school, and, I am honored to say, an embroidery of my own. She bought it about five months before she passed away, and I went through a bit of a dilemma in selling it to her. What kind of person sells work to someone with a terminal illness? Would her family think I was taking advantage of her? Did she really like the piece, or was just buying it as a kindness to my mother (who was asking herself similar questions)? Mom and I tried to put Edith off, but she persisted. She said she intended to leave it in her will to her daughter, an artist who now lived in France, but in the meantime she wanted to enjoy looking at it as she lay in bed. So be it.

I gave her a low price, and when I went to deliver it she didn't have all the money, but I said it didn't matter. It was an awkward transaction on my part - I felt guilty taking any money at all, but knew that it was one of  Edith's great joys to support the arts. When I went to visit her later she made a point of showing me where she had hung the piece, and emphasized how much she appreciated the words, which cryptically reference The Fates, who spin, measure, and cut the thread that is our life. The quote in the centre comes from an essay on needlework in the mid-20th century, wondering why women persisted in creating objects of beauty by hand, when there was no longer the necessity to do so. It is telling of Edith's character that she would choose to contemplate these words at the end of her life.
Now, yesterday I was making my usual Saturday morning visit to GIRO, the island recycling depot and thrift store. What did I see immediately upon entering but the weaving that had hung on the wall above Edith's bed, the work of her daughter Saskia?! I seized it up as if whisking it out of harm's way. All my previous thoughts about how treasures end up in the dustbin leapt into my mind. Had someone clearing out Edith's apartment decided this weaving was no longer important? Maybe they didn't care about it, or had never liked it, or thought it might make someone else happier than it made them. Maybe it brought back painful memories. Maybe it didn't fit into their decor. Who knows? 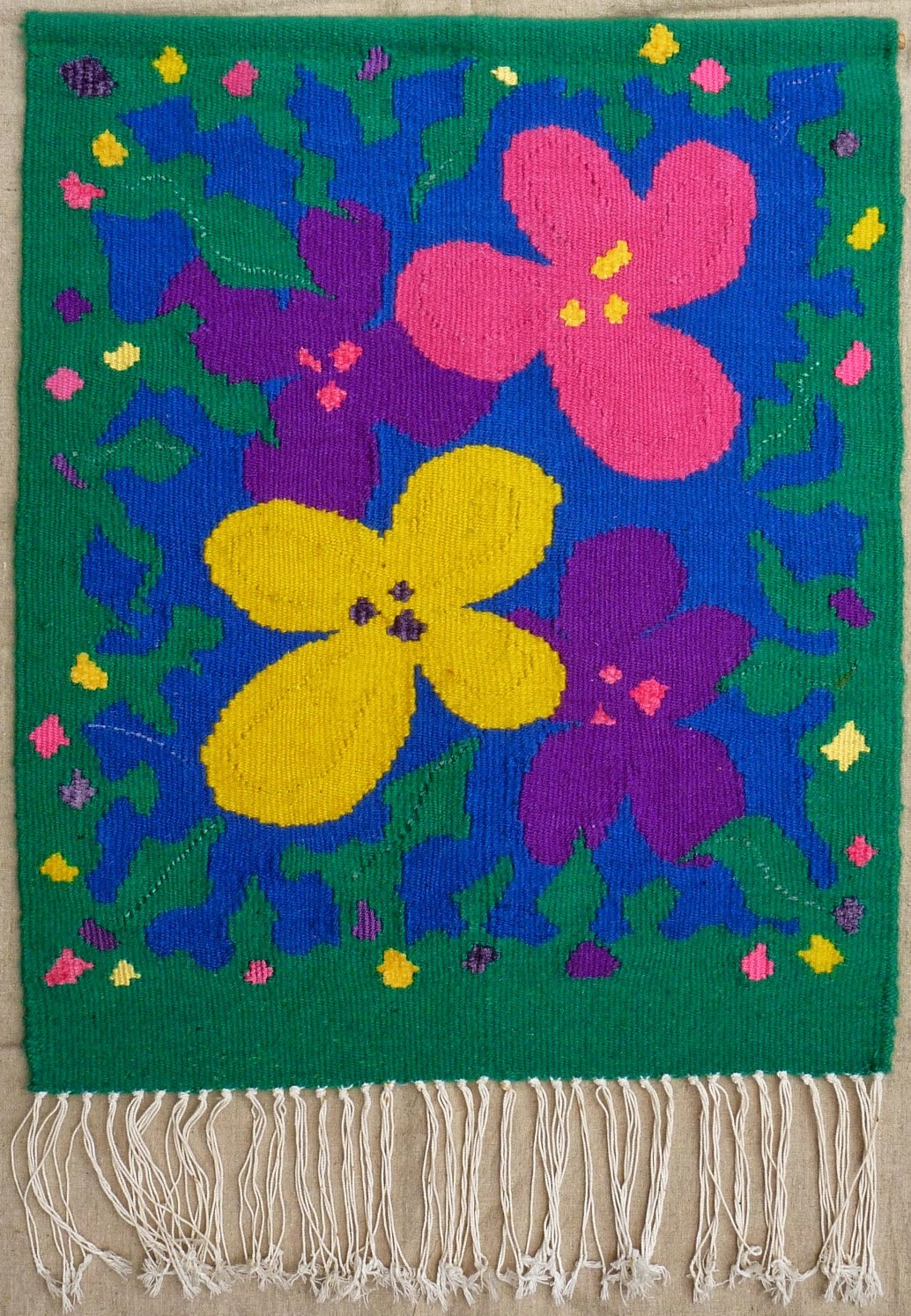 Never mind - the tapestry had made its mysterious way to GIRO, and it was now calling my name loud and clear. I would have paid anything, but, and it kills me to say this, it was priced at two dollars. My heart pounding, I gave the cashier a toonie and raced with it back to the car. It was a completely different feeling than if I had just scored a great find at a yard sale. This was the exhilaration of a successful rescue. I felt like a pearl diver, rising up from the depths with treasure in my grasp.

Saskia's tapestry has a meaning for me much greater than the skill of the weaving, or the pleasing Warhol-esque design. It connects me to, and is rooted in, the life of a person, a lovely person who was kind and thoughtful to me, for no other reason than I was the daughter of her friend. It was meaningful for her, I presume, because it came from the hands and heart of her own daughter, who now lived far away.

It seems fitting that Saskia and I now each have a piece of each other's art. Two works that once hung on adjacent walls are now on opposite sides of the world, linked in memory and spirit. It's a story that Edith would love.
embroidery friends philosophy secret life of objects