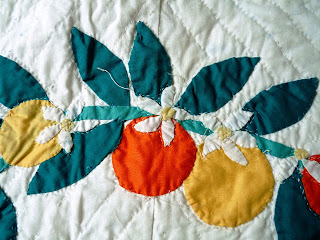 A shamefully long time ago, I agreed to complete a quilt that a friend’s mother had been working on before she passed away. I was honoured to be asked, and said yes before I had really had a look at it. The main challenge, as I saw it, was that the quilt was hand-stitched, something I wasn’t very confident about at the time. It was about half done, an orange blossom appliqué design, queen-size, with a rather ornate, traditional quilting pattern.

For several intervening years the quilt lurked in the cupboard, provoking guilt each time I happened across it. I told myself I was honing my skills so that I would be equal to the project. My friend asked at generous intervals how the quilt was coming, finally inquiring if she had offended me in some way. I had to admit that I kept giving other projects priority.

Today, I at last took the quilt out of the cupboard and had a good look at it. Much of the pattern tracing had disappeared, so I will have to re-trace it. Not a big deal. Much more of a concern was discovering that the existing stitching was uneven and shoddily done, with knots on the surface. Some of the appliqué was neatly stitched, but other parts were crudely done. 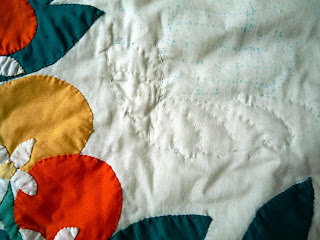 Judging the quality of stitching done by a 90-year-old lady who is no longer with us seems churlish. Besides, it’s her stitching that gives this quilt its value for the owner. My role is just to finish it, preferably as respectfully as possible. To remove particularly botched areas, as I have an impulse to, would be wrong.

All my high-minded ideas about “collaborations with an unknown artist”, as I like to think of working on previously stitched cloth, go out the window. Here I have a known collaborator. She may have had failing eyesight and a shaky hand, but I have to respect her work. My quilting stitches would never win any prizes, but I do try to keep them even, and I hide my knots. It sounds silly, but I’m afraid of too great a contrast between our work, that somehow I’ll make her look bad.

But ego must go out the window too. This is not my creation.  I am simply a hired needle. I’ll try to do a nice job, but keep myself out of it. I’ll try to focus on how my friend will be happy that I have finished the quilt at last, and that her granddaughter, who will receive it, will be able to curl up under something that her great-grandmother made.
mending quilting