Generations of the Image

on January 26, 2013
C'est fini.
I don't think I've mentioned that Louis Nicolas used the illustrations of Conrad Gesner, a 16th C. Swiss naturalist, as source material. In the Codex Canadensis and the Writings of Louis Nicolas, Francois-Marc Gagnon shows the connection very clearly. At the time, people rarely drew from life, and they didn't have cameras, of course, so the way they knew about the creatures of the world (both real and rumoured) was through big books of engravings. Gesner's five volume set was the definitive edition.

Now, the Codex was re-bound at some point in its history, and seems to have lost a bit of page width in the process, often cutting off part of the drawing. Since I intend to stitch the swan, this presented more of a problem than usual, since half the beak is cut off, and it seemed a little odd even for Louis Nicolas. So I went to the source, finding a great collection of Gesner's images at the Bibliotheque Nationale de France website. And there was the swan: 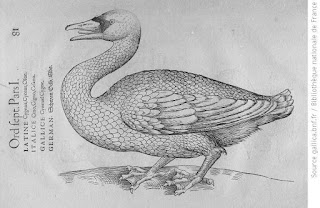 Compare it to Pere Nicolas's version: 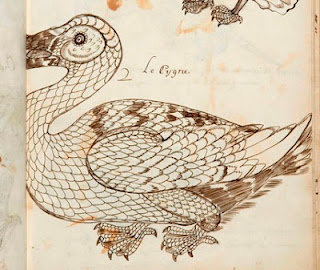 I wasn't sure what was going on with the beak, but with Gesner's image I can see that he showed the tongue, as did Louis Nicolas, albeit a bit shorter, as I guess he was tight on space. What is really odd are the legs and feet - he completely truncated the legs, and used his standard way of rendering bird's feet instead of following the Gesner. I wonder what happened - did the library close before he finished the feet, and so he went back to his cell and drew from memory? Or, did he, like most of us, have a pre-programmed image in his head of what it SHOULD look like, and he just went with that rather than really seeing what was there?

In any case, for my third generation rendering of the image, I have taken the liberty of filling in the missing bits of the beak and tail feathers. It's a deviation from my aim of being as faithful to Nicholas' image as possible, but it would just look too odd other wise. Hey, I'm an artist, not a literalist!