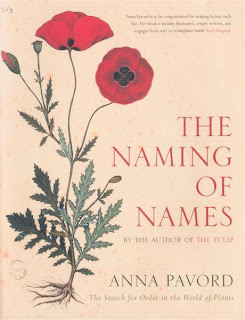 My guiding spirit is hard at work. Remember the mystery illustration that inspired my blackberry bramble border? I was browsing at the local bookstore and my eye caught a book on the gardening shelf titled "The Naming of Names: Searching for order in the World of Plants". I picked it up, gave a quick flip and immediately decided I had to have it. Got it home and sat down to go through it more carefully. And there, leaping out of the pages, was my blackberry bramble. Actually, turns out it was Dioscorides' blackberry bramble, from an ancient codex known as Juliana's book or the Vienna Dioscorides.

Dioscorides was a Greek physian, pharmacologist and botanist who did some early work on the classification of plants. A bound manuscript, based on his text and drawings, was presented to Byzantine princess Juliana, daughter of the Emporer Anicius, in 515 AD. It apparently stayed in Constantinople for over a thousand years before being moved to Vienna, where it still exists. In fact, it has been inscribed on UNESCO's Memory of the World list as one of the world's essential documents that is of such significance that it transcends the boundaries of time and culture.

What is fascinating for me is this common thread of our human need to understand the world around us that runs  from the ancient Greeks, through the Dark Ages, to the Renaissance and voyages of exploration, that brought Louis Nicolas to the New World, and eventually, his book to my doorstep. And then, of course, this humble little blog posting is being read by you, and who knows where it might go from there!

There's lots of directions my wee brain could run off in, but the aprons await and I must have them finished today. More anon.
codex canadensis philosophy