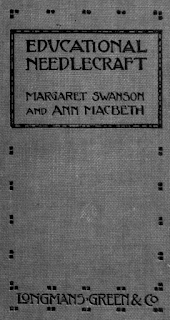 Okay, I admit it. I am a complete nerd when it comes to the intersection of embroidery, history, education and psychology. I hope you will understand my seemingly unreasonable excitement over a document that I just downloaded. Educational Needlecraft, published in 1911 by Margaret Swanson and Ann Macbeth, is a treasure, even on the computer screen. It cannot be imagined how incredibly thrilled I would be to hold the real book in my hands!

Swanson and Macbeth were very influential artists and teachers at the Glasgow School of Art. Although they  also worked in other mediums such as bookbinding and metalwork, it is their legacy to embroidery that is most remembered. Working in what would now be called "Arts and Crafts" style, their embroidery and design remains distinctively fresh, elegant and charming.

What is notable about their book is their emphasis on playful, exploratory learning and their respect and insight into a child's physical, intellectual and emotional development. Their lessons are indeed both fun and practical. I have never particularly wanted to go back in time. but I just might invest in a time machine if it could transport me into Swanson and Macbeth's classes.

I initially found information on Educational Needlecraft in Gail Marsh's Early 20th Century Embroidery Techniques, a fascinating volume that I fell asleep reading last night. She also mentioned other books by Margaret Swanson, including Needlecraft and Psychology, published in 1926, which I want to read so bad my hands are shaking just thinking about it.