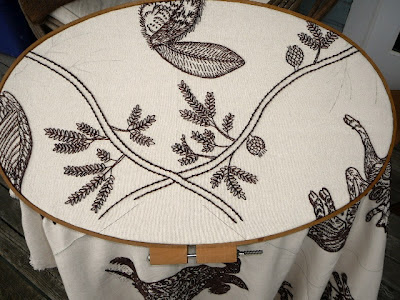 Arborescent means "tree-like". That is what I am going for with the branch-y foliage that twines around the animals. I was surprised to find this step the most challenging so far.

First, to come up with a design, given the zillions of options it seemed were available to me. I consulted all my design and pattern books, looked at lots of 17th C. crewel work, did a lot of sketches, and finally returned to Louis Nicolas and the Codex. Pere Nicolas did several pages of botanical drawings, and I chose his drawing of the white cedar, which of course looks nothing like cedar. I considered drawing a branch of cedar so that you could recognize it as such, but finally decided to stick to Nicolas's clumsy rendering. It seemed more congruent with the overall concept and the odd critters seemed more at home surrounded by the giant seed cones and leafy fronds.

Then, a final design was drawn, based on an ogee structure. I reversed and mirrored the upper section of foliage for the lower, so that there would be a symmetry. I traced the basic lines of the branch along the diagonal basting I had put in at the beginning, adjusting the foliage part a bit so it wouldn't crowd the animals too much. So it is not perfectly symmetrical but hopefully will appear balanced to the eye of the viewer. 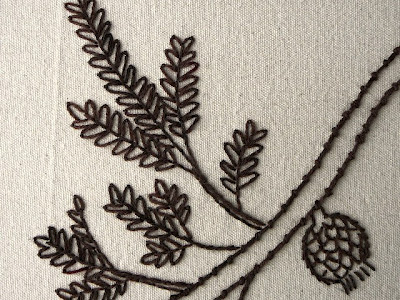 I stitched the main line of the branch first, in coral stitch, which was a new one for me. Its bold texture seemed to resemble tree bark, and it was quick to work. I used sort of a detached chain stitch for the individual bits of the cedar fronds. I was quite uncertain about it for the first while, and it wasn't until I got a fairly big chunk done that I could see that it was working.

It's fairly slow going though, and will probably take me a couple of weeks to finish. I'll try to keep things interesting here in the meantime.
codex canadensis embroidery