Evelyn Roth and Textile Art in the 1970's 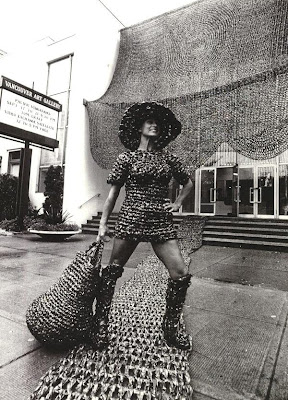 Here's a blast from the past! In my weird, arty teen years in the remote outpost of Vancouver, British Columbia there was an artist, Evelyn Roth, who did wild and crazy work with used videotape, dance and performance. Her work really captured the zeitgeist of that era, and was a source of encouragement and inspiration for me. She now lives in Australia and, in her own 70's, still makes art.

Check out this video as she talks about working with crocheted videotape. Or this one where she discusses the early years of wearable art.

And, like the loops of crochet, life can circle back on itself in surprising ways. Yesterday, my friend Sam was looking at one of my weaving books and marveling at the mysterious language and technical intricacy involved in weaving. He mentioned attending an exhibit at the Vancouver Art Gallery back in the early '70's that featured fibre art, and said it really opened his eyes about what could be made with textiles. That tweaked a memory in me, as I had visited what was probably the same exhibit as a young teenager. I asked him if he remembered anything in particular from the show, and all he could say was, "It was fuzzy." (So much for the indelible impression it made, but then again he is more interested in guitars and car engines than cloth.)

But when I found the above picture, and showed it to him, he said, "Yes, I remember being amazed at how many miles of videotape it must have taken her to make that." It might be just a coincidence, but who knows how seeing that exhibit may have shaped his thinking and attitude and ended up with him sitting in my living room reading a book on weaving forty years later. So thanks, Evelyn, for your work and how the threads and connections you have made extend through time and continue to be relevant today.
art vs. craft inspiration