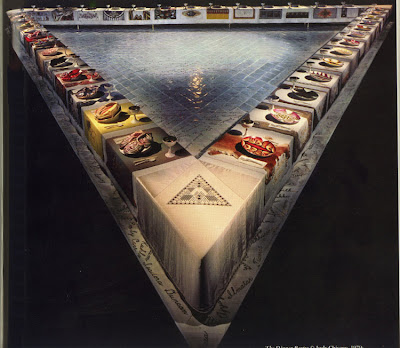 I could be setting myself up for a lot of comments about how shallow my thinking is and how I completely misunderstand elementary philosophy, but here goes...

A comment from Drucilla Pettibone on my enthusiasm over Betsy Greer's ideas a few posts back really got me thinking. We had been talking about the "baggage" art carries and Drucilla wondered what sort of baggage might be laden upon the shoulders of craft. Of course, any creative endeavour has all kinds of historical, cultural, ideological and philosophical weight attached, so I set the back burner of my brain cooking on this topic and here is what I have arrived at.

Endless amounts of discussion have arisen during the last half century or more on the division between art and craft, with craft often being considered the poor cousin of art. Various theories have been offered as to why this might be, with gender politics being the leading culprit, at least when I was in art school back in the 80's. Rozsika Parker's The Subversive Stitch was our text. The general opinion seemed to be that as women were devalued, so was their creative work, which primarily fell into the region of craft. A significant artwork examining why craft was marginalized, along with the women who made craft, was Judy Chicago's The Dinner Party.

The Dinner Party happened to be in Toronto in 1980, at the same time I lived there, but I never went to see it, even though I had a friend who worked at the AGO and who could get me in for free. I was put off by the hoopla surrounding the installation, and the "artstar" behaviour that my friend said that Chicago had exhibited towards the gallery's staff. And I, being young and not well attuned to feminist thought, felt that the images I saw of the work, particularly the plates were a little, well, unsubtle. So I missed my chance.

But last year I picked up a copy of Embroidering our Heritage: The Dinner Party Needlework at the local Free Store. I figured I owed it to my own work to at least be familiar with such an iconic piece of art, which The Dinner Party has come to be. But I still didn't read it until just recently. I was amazed at the whole project and particularly impressed with the quality of the needlework (39 embroidered runners and three altar cloths) that were created by unpaid volunteers, often art students who were unskilled in embroidery to start with. (Much controversy was created by Chicago's supposed treatment of her workers, who were mainly uncredited. Perhaps this book is an attempt to correct that, but I still came away with the idea that Chicago had a pretty overwhelming ego. The workers are listed in a small chapter at the back.)

My point, which I do have somewhere, began to formulate after reading the part of the process where the workers, after spending hundreds of hours of volunteer time creating really magnificent embroidery, had to cut HOLES in the runners to accommodate the bolts that would securely attach the plates to the tables. (Theft and security issues take priority over the integrity of the object.) Apparently this was quite traumatizing to the workers, but Chicago says that "in typical Dinner Party fashion, everyone became involved to make the slits as attractive as possible, even though they knew that they'd never be seen."

What I see here is the subordination of craft to the greater glory of art. And hence the voluminous baggage. Chicago knew early enough on that the plates would need to be secured, and could have designed the runners so that the holes were included. The workers saw cutting into their embroidered cloth as a violation - and I see it not just as invalidating their time and skill and ruining the integrity of the cloth, but as fundamentally shifting the role of the cloth from a functional, stand-alone object to becoming a representation of itself to serve a larger purpose.

And here I defer to Philosophy 101, and Plato's Cave. Plato describes a group of people who have lived chained to the wall of a cave all of their lives, facing a blank wall. The people watch shadows projected on the wall by things passing in front of a fire behind them, and begin to ascribe forms to these shadows. According to Socrates, the shadows are as close as the prisoners get to viewing reality. He then explains how the philosopher is like a prisoner who is freed from the cave and comes to understand that the shadows on the wall are not constitutive of reality at all, as he can perceive the true form of reality rather than the mere shadows seen by the prisoners.

In the Dinner Party, I suggest that the embroidered runners held their true form until the moment a hole was cut in them, and they then became a representation, a shadow. Of course this is part of the baggage art has been struggling with since Plato's time, of how to be "real."

Craft, I believe, is inherently real. It is made with our hands, and has purpose in our lives, as of course does art. But craft begins and ends as itself, whereas art functions in a more ephemeral way. This is not to say that craft cannot transcend boundaries, because of course it can. But it doesn't have to.
art vs. craft