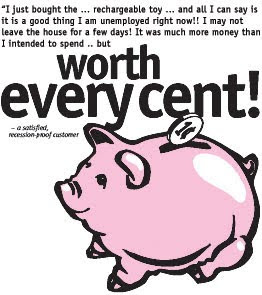 It was a night that I'd rather forget, one of those evenings of personal excess that left me wanting a good hot shower and lots of soap. My excuse is that there is darned little entertainment on the island and I was needing a night out with the girls.

But I'm getting ahead of myself. My good friend and chicken mentor, Miss Jay, phoned me on Friday afternoon asking if I wanted to accompany her and some of my other favourite people to a special ladies evening at our one and only nightspot. Seems the proprietress of Sexcessories, an adult shop on the "other side" (across the water) was coming over to host a party for us sex-crazed but accessory-starved hippies. The first thing I said to Miss Jay was, "Doesn't she know we whittle our own sex toys?" but agreed that it sounded like it might be good for a laugh.

The first sign nothing good could come from this was when I informed my boyfriend where I was going. "Do you need money?", he asked instantly. Since I have never known him to part with a penny without several hours of careful deliberation, I should have seen his suddenly open wallet as a sign of trouble a-brewing.

However, I blithely joined my friends at the "Blue Roof", and found out that each of their husbands had enthusiastically handed over their wallets as well. I imagined an island of middle-aged married men, all sitting at home in eager anticipation of a rare night of romantic action. (Apparently there is some sort of gender inequity in the the ratio between desire and fulfillment here on the island, but I'm much too busy to figure it out just now.)

Anyway, our hostess for the evening, Sheila, and her assistant Carmen, were just setting out their wares when we arrived, so we ventured over to the bar side of the establishment. It was unusually full, even for a Friday night. Nervous guys milled about, making anxious jokes about being made redundant by a couple of AAA batteries. Still, my little gang was confident we were going to have a good laugh and go home early (and empty-handed.)

Which just goes to show how woefully naive we were. These sex toy parties are run more masterfully than Tupperware or Mary Kay ever dreamed. They are designed to move product, lots and lots of product. First, they started late, meaning we had more than one drink at the bar before going in. Then, they started off with the more innocuous products such as the lotions and honey dust, knowing they could lull us into a false sense of comfort. I kinda hoped we were going to give Sheila a run for her money when the first question asked was "What are the health risks?" We're sensible island women after all, more used to chopping firewood than dressing up in skimpy lingerie.

But no, as the evening went on, and the laughing and giggling of the audience got ever shriller as more and more exotic items intended for intimate pleasure were passed around the room, Sheila just kept up her spiel. She could barely be heard above the clamour, but by that point it hardly mattered what she was saying. When the tray of champagne appeared, a "gift" from the bar owner, just as she finished her presentation and opened her order book, chaos erupted. The atmosphere in the room was charged, and it wasn't just because of all the batteries. You couldn't tell the difference between us sensible gumbooted island women and a crowd of stiletto-heeled city girls. Everyone, older and younger, coupled or not, seemed to be in need of items of a strawberry-flavoured, sparkling, twirling, silicone-based and wired or wireless nature.

Well, except for me. I do read Dan Savage, I know what kinds of kinky stuff us humans can get up to, but I don't want to know if my neighbours are doing it. I guess I'm the shy type, blogging to the contrary. I've never been the sort to share secrets at pajama parties.

I retreated to the bar, where the men were all (relatively) calmly watching the hockey game, and where the bartender gave me a glass of water and patiently listened (or at least seemed to listen) to my incoherent rambling about "too much information".

The girls very kindly drove me home. I didn't ask, and I sure as heck don't want to know, what was in those opaque pink bags they were carrying.
island life