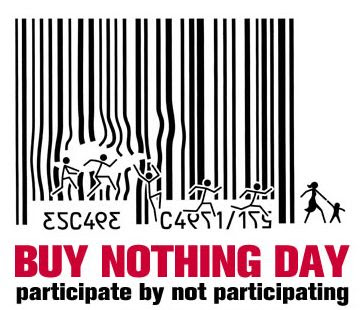 Pretty much every day is Buy Nothing Day here on the old homestead. Even if I had a disposable income, there really isn't anything to spend it on, other than local produce or an evening at the pub.

Over the last couple of years, I have been living on what I thought was very little money. About $900 comes in each month, and $600 goes out for rent and phone. The remaining $300 buys groceries, dog food and the occasional chocolate treat. God forbid there be an emergency, but most months I manage just fine.

But recently I met a guy who has been living for the last 14 years on $2000 a year. That works out to about $160 a month. Now this guy does own his own home so he doesn't have to pay rent, but that still means awfully meager rations to live on. How does he do it?

A lot of scrimping and saving, mostly, but I have to say he is pretty much the happiest person I know. He plays a great Spanish guitar and has a charming sense of humour. He has many friends, some of whom do indeed look out for him with offerings from the vegetable garden. He does have a bit of an unusual interest in sungazing, which apparently can be so nourishing to the soul that one doesn't need to eat food, but perhaps in his case it is a purely practical quest.

I read a while ago about Heidemarie Schwermer, a German woman who has been living without money for fourteen years. She also speaks of the positive effects of opting out of the economic system: “Life became much more exciting. More beautiful. I had everything I needed and I knew I couldn’t go back to my old life. I didn’t have to do what I didn’t like, I had a more profound sense of joy, and physically I feel better than ever. Living without money was just the first step. I realised that I wanted to change the world and I wasn’t going to do that by looking after someone’s cat while they were on holiday.” More can be found about her inspiring approach to life here.

Several years ago, my friend Wendy Tremayne lived without monetary exchange for twelve months. She told me that it was the richest and most fulfilling year of her life, and the experience prompted her to move from New York to New Mexico, and immerse herself in a more sustainable way of living.

Both Wendy and Heidimarie used swapping of skills, or barter, to obtain the goods and services they needed. But they also mention a phenomenon that I have experienced as well - that when living a conscious life, with a focus on genuine human interaction, what you need appears as you need it.

Another brilliant spark, Carmen Mills, has written a thought-provoking piece about money and our relationship to it here. She draws from her Buddhist practice as she says "Lend it, spend it, give it away. But keep it moving, because it is always an exchange, energy for energy, as the wheel goes ’round."

And especially for artists and creators, one last reference if you desire any more inspiration to re-examine your relationship to the material world: Lewis Hyde's book The Gift. It describes the concept of a gift economy, and makes for a very exciting afternoon of reading, especially if you're not the sort to hit the malls on November 26th.
consumerism