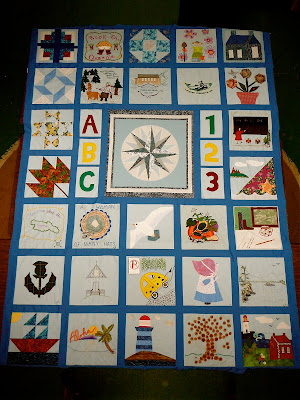 I may be eliminating some drama and anticipation, but here is the pieced top. I will probably go back and do some staged photos of the individual makers working on their square, but alas, my brain didn't click in to the potential of this project until I was given the basket of finished squares to piece.

My own contribution is the Mariner's Compass in the centre. How did I manage that, being the johnny-come-lately to this group of sewers? Well, at the last minute, the ladies decided that the quilt should have a star in it. (Haha, that sounds funny - they meant a fabric star shape, not a celebrity, which I am assuredly not.) I volunteered and downloaded a paper foundation for the compass, merrily sewing along until I was was halfway through and realized to my horror that it was twice as big as it should have been. (All squares are 12"). I finished the thing, 'cause that's what I do, and thought it could perhaps be used for a pillow.

But when I sheepishly showed it to the group, they wanted to use it for the quilt. Which meant a juggling operation and a major revision to the planned layout. The half panel ABC and 123 were chosen because Pat was an elementary school teacher for many years and in her own words, teaching was her proudest accomplishment. Her friend Charlotte, also a former teacher, appliqued the felt letters and numbers the night before leaving for a three month trip to southern sunshine.
Lasqueti Quilt