Stitching Up a Chicken 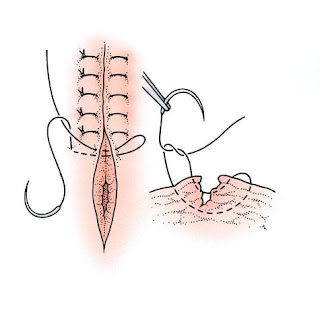 This morning I went to let the chickens out of their pen and walked into a scene of carnage. Apparently a raccoon or mink had finally found their way to the coop - I had been warned about them by the locals, but up til now there had been no sign of the pesky varmints.

But this morning there were feathers everywhere, bits of flesh, and only 4 chicken instead of 5. The missing girl was one of the purebred cuckoo marans, and a good layer too.

The remaining birds were all in a tizzy, acting very skittish. The poor rooster looked dejected at his failure to protect. I couldn't figure out how the vicious killer got into the pen, but spent my afternoon reinforcing the fencing and putting on a new door.

Meanwhile, I saw that one of the hens (let's call her Zelda, as I call all the chickens, except for the rooster, whose name is Thurston) had a big gash on her neck. She seemed lively enough, but wouldn't let me get close for a look. After they went to roost in the evening, I went and got her from her perch, brought her inside and let her rest in a cage. There was a hole about an inch in diameter on the back of her neck, right down to the neck muscles. Yikes!

I assembled a kit of saline wash, hydrogen peroxide, scissors, tweezers, Q-Tips, a sewing needle, and dental floss, and then, following the excellent instructions on Backyard Chickens, cleaned Zelda's gaping neck wound, packed it with antibiotic cream, and sutured her up. My able assistant held her quiet on the table - with her wings wrapped close to her body with a towel and her eyes covered, she stayed very calm.

She's back in her cage, resting comfortably. I think I will keep her separated from the others for a few days so they won't be able to peck at her.

I don't think I've ever felt quite so emotional making a stitch. The sutures I made were awkward and untidy and hardly correctly done, but I pray they do the job. Tomorrow morning I'm going to practice making proper ones until I can do them blindfolded. Hah, and I thought I knew how to sew... 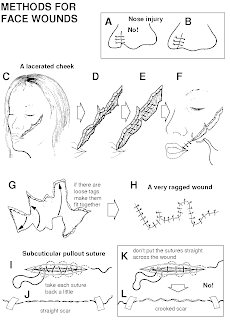