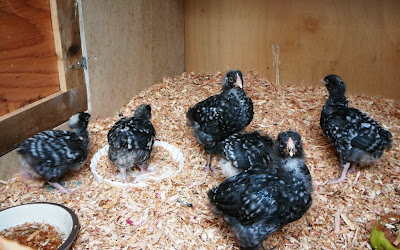 I think my chickens are afraid of me.

I did the best I could to prepare: I read all the manuals, I did the breathing exercises. I built a cozy coop - well, maybe it was an outhouse once but it was a STYLISH outhouse. I gathered earwigs for them, I fed them fresh lettuce and tomatoes from the garden.

But now when I come near them, instead of looking happy and relaxed like the picture above, they huddle, with the bravest one giving furtive glances to see if I'm still there.

There was an incident. 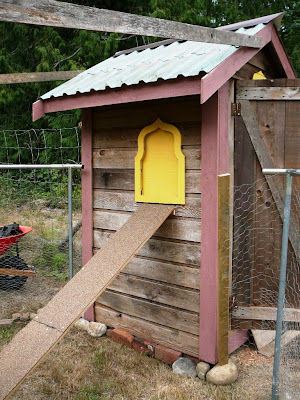 I spent all day attaching repurposed chicken wire (it had been used to protect trees from the deer and sheep) to a lovely hexagonal pen my brother Dave built out of some modular steel tubing we had in the shed. I buried the edge of the wire and gathered and placed rocks around the perimeter for security. I made a door, and voila, I was ready to welcome the chicks to their new yard. 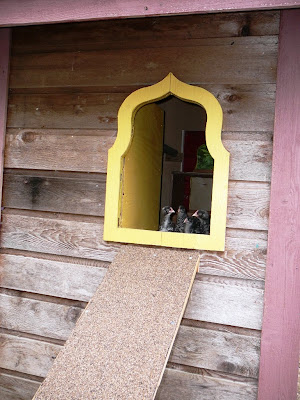 I had anticipated a bit of anxiety about the long ramp to the ground. I opened the door and gave them time to look around and venture out. 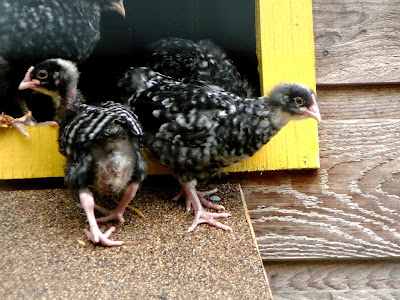 After a half hour or so, my brother Dave decided to speed things up a bit. He reached inside, grabbed a bird and let it flap to the ground. The others got a bit agitated for a moment but soon forgot about their missing sixth. Dave gave a few swats with his arm and herded the rest out unceremoniously.

They LOVED their new yard. Instantly they were pecking and scratching and eating bugs. 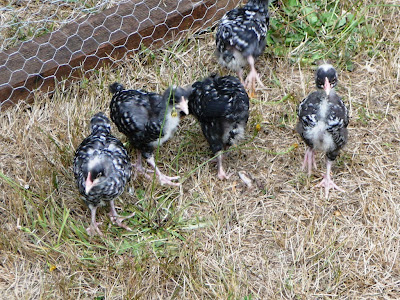 Then it started raining. And Angus the cat came into the orchard to see what was up. And the chicks started running in circles to get away from the rain and the orange cat peering at them through the wire and they found the only space in the wire that it was possible to get through and ran out into the vast open unguarded orchard.
I scooped Angus up and ran him into the house, yelling at Dave over my shoulder to grab the chickens if he could.

After confining an outraged Angus I returned, to find Dave calmly rounding up the chicks. He got them back into the pen easily enough and went back to his work, whistling jauntily.

A shameful and traumatic interval followed where I ran around the 8 foot wide pen like a total idiot, trying to gather up the chicks to get them back into the coop. I hope and pray there were no hidden cameras. I eventually caught them all, but am sure the fragile bond I was trying to create has been terribly damaged.

Is it too soon for therapy?
Chickens