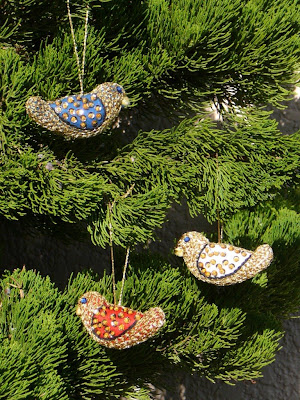 I confess! I made these little Christmas ornaments. From a kit.
As someone who really, really prides herself on designing her own work, it was with a little bit of guilt that I embarked on making these birds. I found this kit in the local thrift shop, unopened since its 1983 copyright date. Designed by the former reigning goddess of stitchery, Erica Wilson, and published by Columbia-Minerva, it turned out to be quite pleasurable to complete.
The bird outlines were stamped on a good quality wool felt, and there was a very generous supply of thread and sequins. Even needles were included. I was in a frame of mind where I just needed to keep my hands busy, so this little project fit the bill.
I especially enjoyed the 3-dimensional aspect of the ornaments, and am now thinking stumpwork is something I might explore a bit more.
Added a few days later:
This little project must seem like a bit of a contradiction to my previous post, but I did notice a few things. Each bird took about 4 hours to complete, so it was not a quickie. Although I chose it because I needed something fairly mindless, the gold metallic thread did not pull smoothly through the felt, so I had to work the stitches with care. The sequins were fun.
And the inspiration to explore stumpwork was a gift. I agree with Jude's comment, I never quite knew how I might use it in a piece. I also always used to think it was contrary to the drapey fluid nature of cloth. But there is the potential for me - how can I play with that space of in-between two and three dimensions? I had a teacher at art school who once suggested that that space was hitherto unexplored (and dominated) by old masters, and thus a new frontier for women artists to explore. In my early work, I did a number of piece that I considered sculpture (3D) but were actually flat, and used layering and light to give the sense of depth.
book reviews embroidery