Once Upon a Time (The Story Continues…)

on September 14, 2008
I turn 50 tomorrow. Here is a tale that I hope may reassure those who read it that magic, romance and true love can come to us at any age. 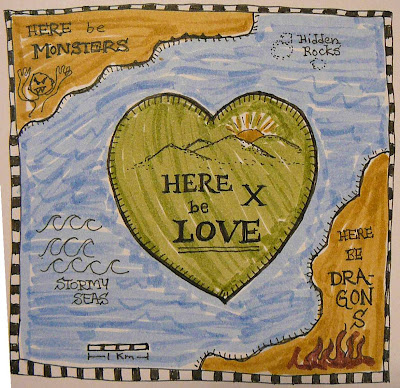 The girl and her dog journeyed over land and sea, and found themselves on a magical island. There was a little house for them to live in, and a garden full of fruit and vegetables. They spent their days in happy companionship, walking on the beach and working in the orchard, accompanied by hummingbirds, ravens, and the occasional feral sheep.

The girl kept a blog to let her friends know what she was up to. One day she received a message signed “A Secret Admirer”. She was perplexed – who could it be? She had so many sweet friends who had helped her through difficult times. Most of them were women – how many men read a blog about sewing? But the girl was clever, and soon guessed who it might be – one of the prince’s courtiers, a steadfast, kind-hearted knight who had been loyal in spite of the prince’s ineptitude.

The girl and the knight began a correspondence and soon discovered that they shared many things in common. One day, with butterflies in her throat, the girl decided to invite the knight for a visit. He set out the very next day, more scared than he cared to admit, but he was courageous, and ready for adventure. When his boat touched the shore, the girl was waiting.

The island’s magic swept over them. Their middle-aged skin became smooth and glowing, their near-sighted eyes shone like stars, and they fell into each other’s arms like long lost lovers who had finally found each other again. They lay in the light of the full honey moon, marveling that such a gift should be given to them at this late stage in their lives.

Days passed, each one bringing the girl and the brave knight closer together. They slept like puppies, curled together, warm and gentle. The sun blessed their bodies as they bathed in the sea, and the green fronds of the cedars sheltered them as they rested underneath. The knight told stories of his adventures, making the girl laugh merrily, and he cooked ratatouille and patty pan squash with maple syrup. The girl tended the garden and made the little house a cozy home, and the dog (we mustn’t forget the dog) was overjoyed to be adored by two people instead of just one.
my story