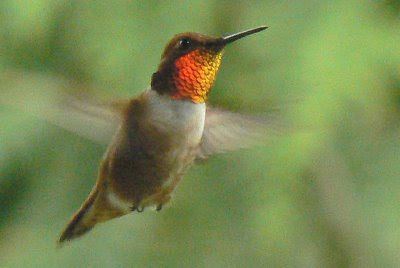 credit
A few days ago I noticed rufous hummingbirds zooming around the deck. At first thinking I was being nudged by the hand of God, I spent a few moments being blissfully grateful. Then I realized that they might have been attracted by my raspberry red panties drying on the railing. The next day, no hummingbirds, and no panties either. Coincidence or divine plan? This morning proved my somewhat sketchy hypothesis - once again the red panties were on the railing, and there were hummingbirds galore! I guess I should put out a feeder, can't bear to think of those poor confused little birdbrains! (But I'm still grateful for their presence.)

Further encounters with nature...
Keiko and I went for a walk around Spring Bay at low tide. There were the most amazing tidal pools and rock formations. We had a blast exploring, and I even saved two starfish from frying in the sun. They are the loveliest magenta colour - actually the colours of the tidal pools was mindblowing - iridescent green algae, indigo blue mussels, aquamarine water, bronze kelp beds.

I have been gathering kelp off the beach for mulch in the garden. The garden is slowly being revealed as the waist high weeds are cleared.

Sounds like haiku or concrete poetry. It is a labour of love - gardens always are. I have been working very hard, but it's been good. I somehow managed to get a sunburn right where teenage girls get those skanky tattoos. I had put sunscreen everywhere else, but I guess my shorts were low enough and my t-shirt short enough that everytime I bent over a bit of my back showed. I now have a lovely red ellipse on my lower back.

And speaking of backs, ooohhh, I'd love a backrub.
island life salish sea