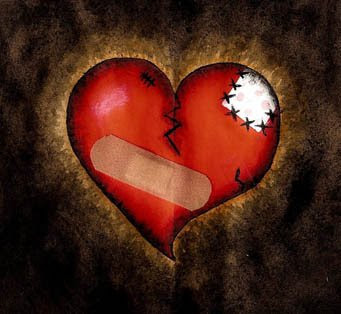 ... there was a girl (well, actually a woman old enough to know better) who was swept off her feet by a handsome prince (well, at least he was handsome).

The girl had a handful of long term relationships in the bag and felt ready to try another one. The prince had survived being married to the Wicked Witch of the West and thought the girl was pretty nice.

So they got married and were all set to live happily ever after.

But then the girl fell head over heels off her bike and was out of commission for a very long time. The prince became worried about who would take care of him.

Then the prince started getting called into the king's office and being told he better shape up or ship out. The girl was very worried because she couldn't work and was afraid the prince would lose the king's favour. "Don't worry, " he scoffed, "The king will never fire me, I'm in the Princes Union."

But the girl kept worrying, and, as the months passed, turned into a terrible nag. "The writing is on the wall, honey," she said. "Wouldn't it be wise to send out some resumes?" The prince was becoming very unhappy because the king wasn't letting up, and in fact had hired some of his henchmen to supervise the lazy prince. So he took some time off and lay on the couch and watched movies to make himself feel better.

At last the day came when the king called the prince into his office for the last time. "Go away and never come back," shouted the king. "You are banished." When the girl heard the news she was upset but still willing to stand by her man. But then the prince told her that instead of looking for a job, he was going to join a Thin Lizzy tribute band for the summer. "They need me!" he said.

And with that, the girl flipped her ever-lovin' lid and told the prince that was that. "I'm going off to earn some money and when I come back I don't want to see you," she cried. The prince rolled his eyes and phoned his ex-girlfriend.

A few days later, the girl came back, with her pockets full. But she was dismayed to see that all her things were on the front lawn, her dog tied to a tree, and the locks to the house changed. The prince was nowhere to be found, but he had left a note: "Take your crap and get lost."

The girl was very sad but knew it was for the best. Some princes just never grow up. She untied the dog and together they set off in search of peace and happiness.
my story