on March 09, 2008
One of the main reasons I went on this trip was the lure of Japanese cloth. No other culture has the technical and aesthetic brilliance, uniqueness of materials or the diversity of techniques as does Japan.

Now, I know I tend to gush in my posts. Consider all I have said before, add a grain of salt, and believe me when I say that the textiles I saw on this trip surpassed anything I could have hoped for. And I didn't go into one museum - they probably would have had to ship me home in an air ambulance if I had, since I would have exploded from multiple textile induced orgasms. 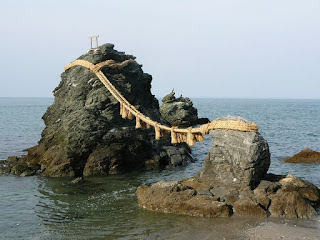 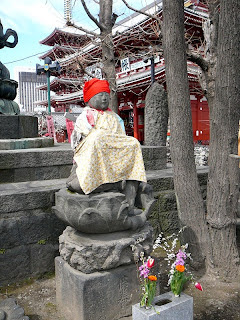 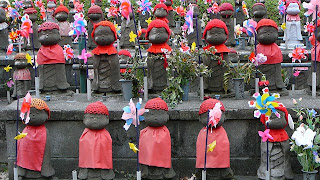 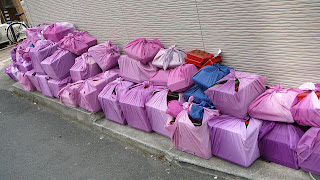 Textiles can be found in all places in Japanese society, not just as the usual clothing and linens. A sacred, handmade rope unites the wedded rocks of Meoto-iwa in Futami. Buddhas are dressed in handknit hats and sweaters. The omizuku, representations of lost or unborn children that surround temples, are also dressed in knit or crocheted hats and cloth bibs to console their spirits. And on the profane end of the spectrum, furoshiki - wrapping cloths - are used to wrap a whole shipment of dishes behind a restaurant.

I went to a fabric store in Kyoto. The shelves were jammed with bolts of traditionally patterned cloth, while samples of the more elaborate designs that could be ordered hung on the walls. The sheer variety of appliques, buttons, ribbons and cords available was eye boggling. 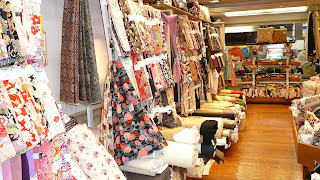 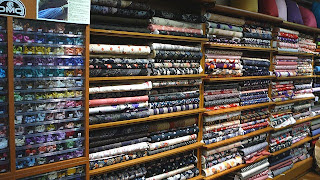 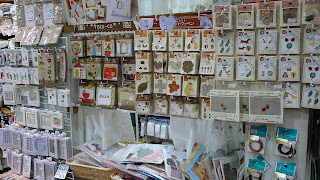 I picked up some treasures at temple market. (I did get about a dozen kimono, but will show them later.) These thread include natural dyed cotton yarns, a skein of wild, un-degummed silk, a ball of thread made from old fishing nets, and coarse hemp twine. I also got samples of traditional specialty linen cloth that is now only made in China - it being too expensive to produce in Japan. 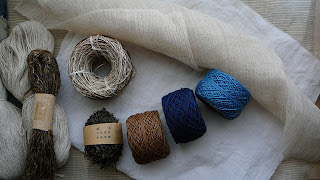 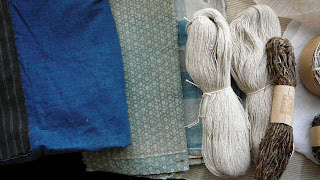 I found some vintage buttons, and skeins of silk thread. 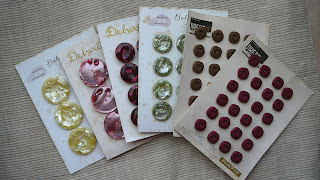 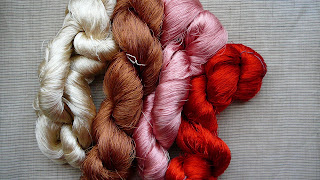 Mrs. Mandu showed me some incredible silk shibori. Shibori is a very refined resist dyeing technique, where threads are tightly wrapped around cloth in various ways to create patterns. Like tie dye, if it were created by legions of genius fairies. 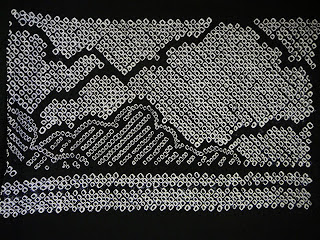 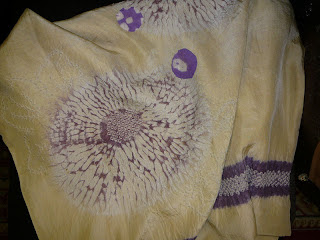 And here are a couple of dolls from her collection. Note the temari balls. 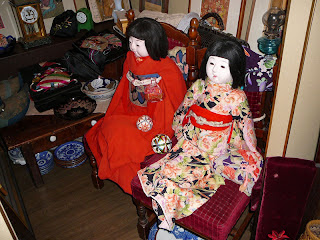 And a few quilts. 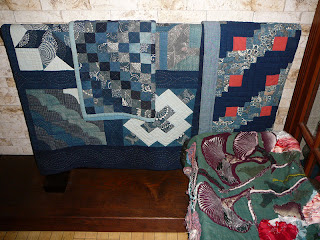 Now, I have to mention that a couple of my illusions were shattered. I have drooled over the images in Japanese craft books for years now, reveling in the world of beautifully organized workrooms, stacks of charming, whimsical fabrics and handmade toys, zakka, quilts and embroidery. I was disappointed to see very little evidence that the women of Japan actually live out these fantasies. In all my travels, and believe me, I have radar for the handmade, I saw one kinda cool looking girl with a hand stenciled skirt, and two ladies showing off their hand sewn and quilted purses. And that was it!

And, I did visit a craft supply store as well. There I found lots of gorgeous materials and notions that we never see in Canada, but also kits galore! Kits for patchworks handbags, for arumigami, for slippers made from rags. There were pre-dyed socks and gloves for soft toys, and pre-cut felt for dolls and other crafty projects.

I realized I had been bamboozled! My naive North American belief that the Japanese craft world consisted entirely of master craftsmen, of Living National Treasures, was dashed. Just like us, the Japanese have succumbed to an industry driven by advertising, in which the craft magazines are but catalogues for the products that can be purchased. The only difference between a craft store in Japan and Michael's in Canada is that their goods seem more artfully designed.

But then, I was just a tourist. Jean Pierre tells me that many craft traditions are dying out, that the young generation had no interest in learning the skills. But I was surprised not to see craft practised at even a basic level. If I had been there longer, maybe I would have found that there are indeed rebel crafters, artists with their own vision, even circles of craftspeople who meet to make things and share ideas. Maybe making things isn't something one shows off in public, but does in the intimacy of one's home.

And my disappointment is mild in comparison to the joy I felt in seeing so many truly beautiful things.
japan travel