Pornography for the Hand Sewer

on December 03, 2007
Back when I was in the remodelling phase of home ownership, I used to watch shows like Bob Vila and This Old House. (We didn't have cable, thank god. If I had be able to watch HGTV I would never have gotten off the couch.) I called these programs "Pornography for Home Owners" in respect to the fantasy world depicted therein. I knew that in real life, my husband and I didn't change into our fresh new LL Bean khakis and re-plaster the ceiling without getting a speck of dust on us or maintaining cordial, expletive-free conversation.

Now, I live in a co-op and don't have to worry about the resale value of my home. I am blissfully reno-free. But I still live in a fantasy world! I have a nasty little habit of living vicariously through Japanese craft magazines. 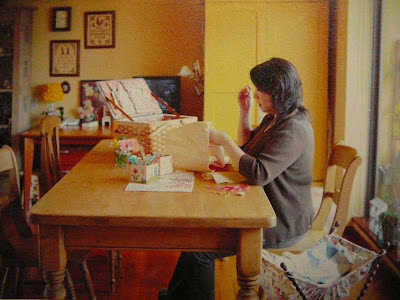 Check out this soft focus image of a woman peacefully sewing in an immaculately clean and elegantly decorated room! 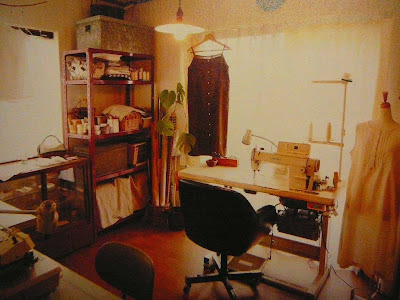 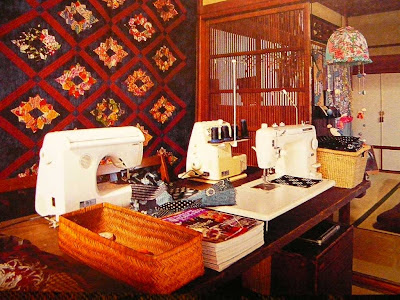 I could probably make a perfectly pieced quilt too if my sewing room was this well organized. Did they oil up those machines or are they just naturally glowing? 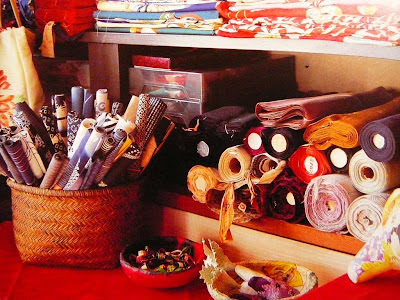 Look at these rolls of cloth! Hey, wait a minute - have they been airbrushed? 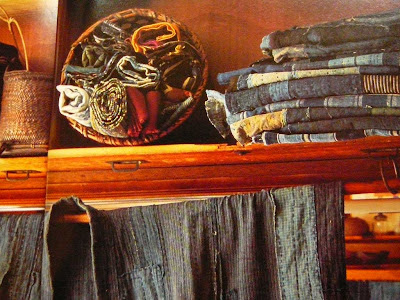 How stacked can you get ...Oh, okay, I'll stop with the bad jokes. 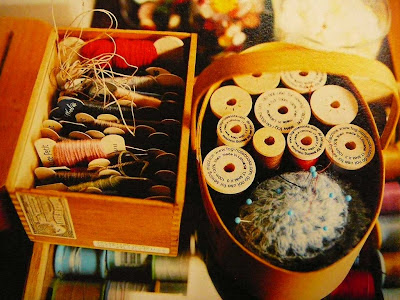 Seriously, this just makes me weak in the knees. 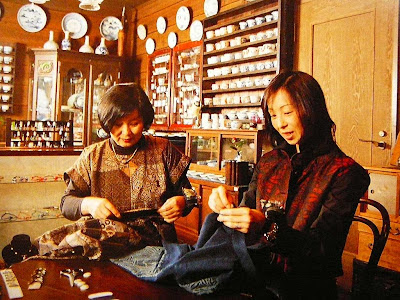 My friend Jean Pierre, who got me hooked on the sordid world of Japanese craft magazines, tells me this alternate universe really exists. He said in a recent email,
"Craft is generally a very female world out here. There are lots of cooking/craft programs on NHK (national station) and it's always women, except for a famous male sweater knitter. Men in Japan go to the office and women live in their own worlds. It seems quite segregated but it satisfies the women I think. The coffee shops and restaurants and stores during the daytime are full of women plotting the education of their children and how to spend the retirement bonus once the men are finished working."

Hmmmn, doesn't sound very 21st C. Ah well, to each his (or her) own. My fantasy world remains captured between the pages of magazines I don't even know the name of - since they're all in Japanese kanji. If anyone is interested in checking out this world, try googling Japanese Craft Books - there are lots of links. And if your credit card can stand it, try Amazon Japan - there is a button you can click for English translation.

I haven't even mentioned that if you get past the typically gorgeous photography of these books, the project instructions are excellent. In graphic form, they are clear, detailed and quite possible to follow even if you don't read Japanese. I tend to go for the more traditional books on embroidery and quilting, but there are oodles on arumigami, soft toys, bookbinding, flower arranging, knitting, you name it.
Studio