on June 11, 2007
So, yes, it has been a crazy week. It started off with a straight-forward enough project. 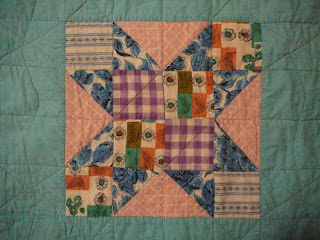 I should have taken a "before" picture. This quilt ended up in my hands, left behind by an old boyfriend. It was originally made by his aunt in the late '60's, in Saskatchewan. Using true prairie thrift, she used real scraps to create something useful first, and beautiful second. 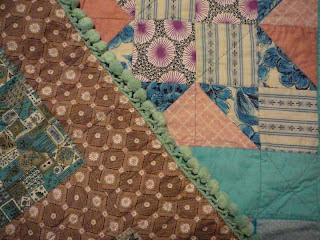 By the time I got it, years of use had left it pretty tattered. It was stained, many of the patches had shredded, and the quilting stitches had rotted away. So I took it apart, reinforced or replaced the fragile patches, added a new batting and a backing pieced from other pieces of vintage cloth, and just for fun, added an edging of pom poms that I got at the Swap-O-Rama-Rama in San Francisco. Then I re-quilted it on the machine, washed it and voila! Resurrection! 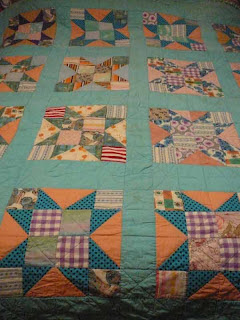 I love the odd old fabric patterns. This quilt has now made its way to New Mexico, where it will grace the home of a dear friend. 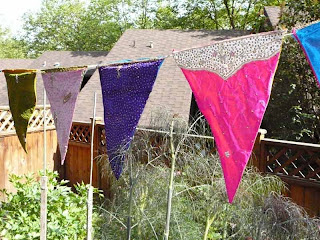 Then, on to my next project. I wanted to make bunting for the wedding. I cut up my glitzy silk sarees into pennants, then attached them to a cotton tape. Recycled, reusable and quite festive! The only downside: I wrecked my new scissors cutting the beaded, sequinned fabric. If I had thought for half a minute first I could have figured that out! 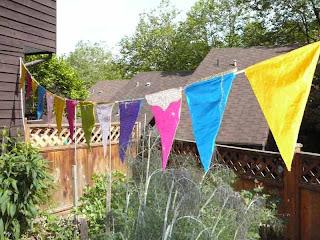 And I promised naked men! Well, Saturday was the World Naked Bike Ride, a brilliant idea dreamed up by Conrad Schmidt of the Work Less Party. Like Critical Mass, it draws attention to both human pedal power and the need for bicycle friendly streets, as well as the infinite variety and beauty of the human body. It's a lot of fun for both riders and viewers too!
Although riders in Paris, Madrid, New York and Japan had sunny skies for their rides, it poured rain in Vancouver. 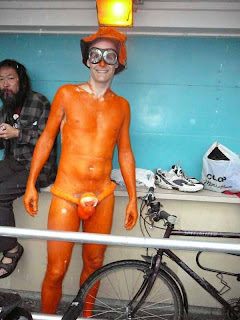 And my brother Rob, electrical engineer extraodinaire, made the front page of the Calgary Sun clad only in what appears to be an orange monkey.
I'm very proud of both Ian and Rob!!
quilting