Thirteen years ago, almost to the day, I had a big scary bike accident that resulted in a broken C1 and T 6, 7, 8, amongst other injuries. After a long period of recuperation, which gave me a great deal of time to ponder about chance, fate, and infinity, I made a few pieces of art. Above is Fate (2008), 20x20, and you can find out more here. It has gone off to live in France.

I can't remember if I made this one first, but is is also from 2008, titled Infinity and measures 15"x52". The line came from a book about Middle Eastern rug design, wherein the central field represents a garden that stretches into infinity. Because it is infinite, sometimes the design is arbitrarily cut off to fit the width of the warp, resulting in asymmetry. Production notes here. It hangs above my sewing table. 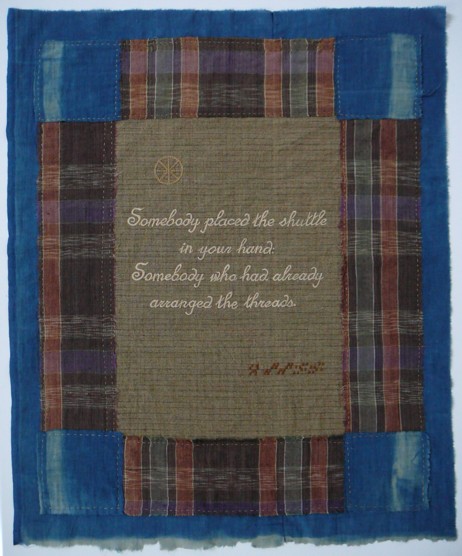 A year later I made this piece, the title of which I cannot remember, with text from Dag Hammarskjold, the second Secretary-General of the U.N., who was killed in a suspicious plane crash in 1961. (A new book about the mystery of his death, The Golden Thread, by Ravi Somaiya, is just out.) I wrote more about its inception here, and its finish here. It languishes in a closet in my studio. I must rotate the collection soon! 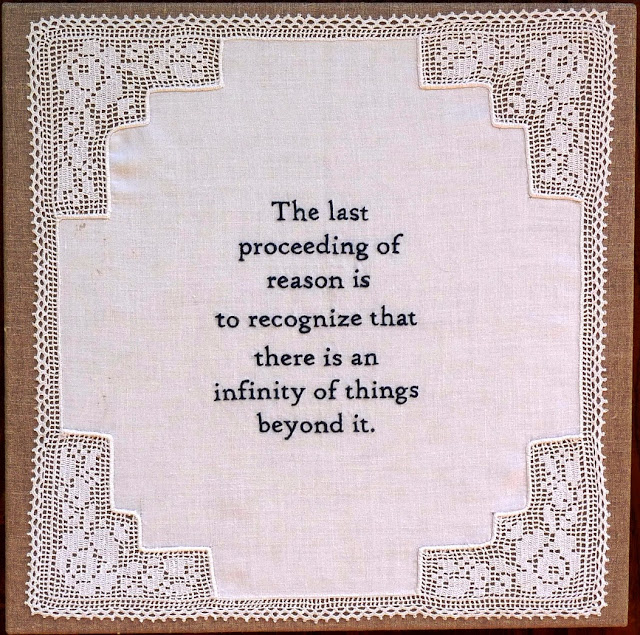 As of now, this is the last of the series, but who knows when inspiration may strike again. I documented the beginning of the 18"x18" piece, called Pascal's Wager here. It now has a lovely home overlooking the Salish Sea.

It feels very odd to revisit this old work. I still like these pieces and think they stand up well to the passage of time. But I also reflect on how I fell down on the job of promoting them. It is the part of an artist's job that I like the least. Other work of mine - good serious work - lies abandoned in a barn in the Kootenays, in a shed on a remote island. My ex-husband (or his new girlfriend) destroyed some pieces in a fit of pique.

So much that we create ends up neglected, damaged, forgotten. Some of it deserves no better. Maybe its moment of glory is in the creation, not the subsequent appreciation. I still nurture a dream (increasingly remote) of being one of those 93-year-old women with their first retrospective. But with a title forgotten here, a computer folder of photos lost there, I face the vulnerability and disintegration of my work. Which is sad, but doesn't stop me from continuing to make stuff.