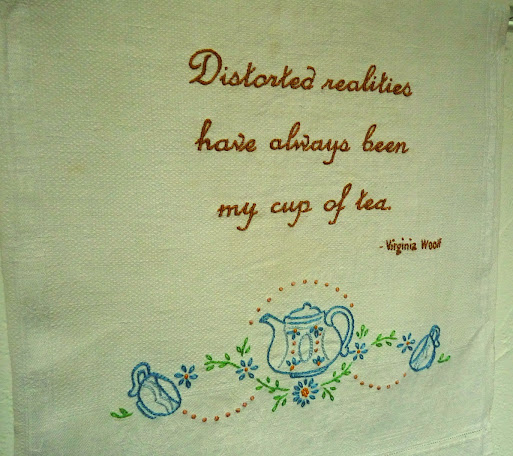 Virginia Woolf's Tea Towel, 2016. 16"(w) x 24"(l) Hand embroidery on vintage linen.
A couple of days ago, at lunch in an outdoor cafe, a woman came up to my table and introduced herself as the person who had bought a piece of mine at a charity auction. (I wrote about the making of the piece in a post from 2016.) There had been a bidding war, and she had won.
"Do you know who was bidding against me? I thought it might be you, trying to drive the price up. I had a few glasses of wine, and I don't know what came over me. Imagine spending $200 on a tea towel! I gave it to a friend of mine because I felt so foolish!"
I will give myself points for not agreeing that, indeed, she was a fool. Not to mention rude. My default mantra these days is that "People are weird."
Instead I mumbled something about it being a good cause, and the person she was bidding against was the executive director of the arts council. I did add that she was very disappointed not to win, as she really loved the piece. And that it was not "just a tea towel".
Later, of course, I thought of all the really choice comebacks I could have made. She might have been impressed that other works of mine have sold in the thousands of dollars, and if she had hung on to the work she would have made a tidy profit by now. I could have explained that this "towel" had inspired an ongoing series in which I embroider pithy quotes from renowned people on vintage domestic linens -- simultaneously elevating the prosaic, and bringing the famous down to earth. I could have questioned her feminist allegiances, wondering if she felt that women's work was not worthy of being honoured, taken out of the kitchen and being hung on the wall. I could drive myself crazy dwelling on it.
But distorted realities are sort of my stock in trade. I thrive on dreams, illusion, tricks of perception, irony. My work is deliberately multi-layered, containing puzzles and riddles. My aim is to give the clever viewer the gift of figuring it out, a nice little hit of dopamine as a reward.