on January 07, 2018
Whew, a very busy holiday season is finally over. Some computer problems held me back from posting, but I think I have a handle on it now, so here goes.

The big news is that I have begun work on my next piece of the Codex Canadensis series. This time it will be a real crowd pleaser, the unicorn. 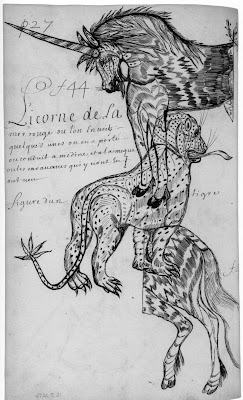 Louis Nicolas has done quite the number with this drawing, splitting the critter into two. It would have fit whole on the page if he had only turned the sketchbook sideways, or he could have drawn over onto the next page, as he had done elsewhere in the book. So it's a mystery.

The really wild thing is how he has considerately provided helpful A and B tabs to aid in putting the unicorn back together, and they are a perfect match! So how he managed to do that when the rest of his body of work is pretty wonky is another mystery. 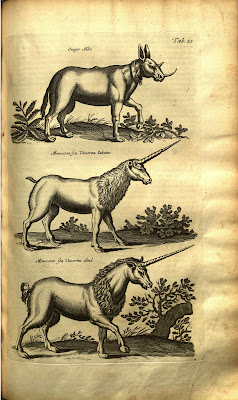 I wasn't able to find a potential source drawing either. (I thought maybe he had seen a drawing or had a template that was split. But no sawn-in-half unicorns on Google.) Gesner had a nice unicorn, of course. And there were lots of unicorn illustrations around in his time. The creature was still believed to exist, although quickly accumulating scientific knowledge would relegate it to myth before too long.

In his text, Nicolas says that he has known men who have seen unicorns in the Red Sea area, and they are reputable men, so therefore unicorns exist. There is also any early map of Canada, showing unicorns in the area of what is now Northern Quebec and Ontario.

The wildcat that he has labeled "un tigre" is more likely a leopard or jaguar, since it has spots, not stripes. Both creatures were known in the 17th C., but I can see how they might be easy to mix up. Again, I could find no source image for the critter. The closest one I could find was a from a 19thC. encyclopedia, but of course could have been based on an earlier image. 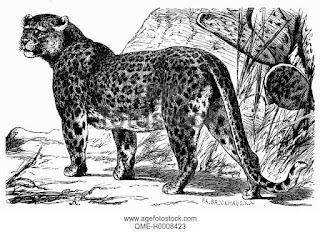 And this painting by Titian has quite a similar pose. 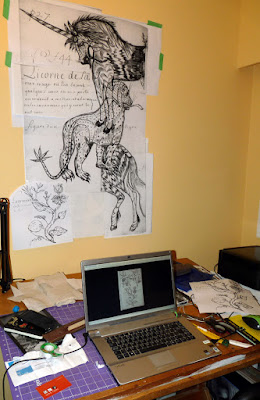 Working in my usual way, I enlarged the drawing by 400% so that the finished piece will be about 36 inches wide and 48 high. I also decided to add a drawing from the preceding page in the Codex, of a granadilla, or passion flower. The passion flower was an important piece of evidence to the missionaries in convincing the indigenous people that the story of Christ was real, and to convert them. (The various parts of the flower are said to resemble the instrument of the passion of Christ.) Although not native to Canada, the plant can be found in the southern part of North America. 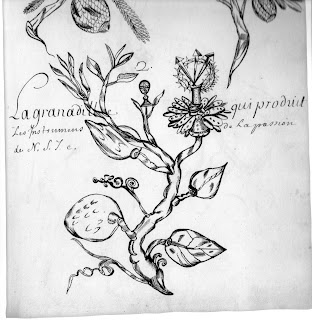 And this time, Bingo! I found the drawing that Louis copied. Frei Cristavao de Lisboa (1583-1652) made the lovely engraving below. 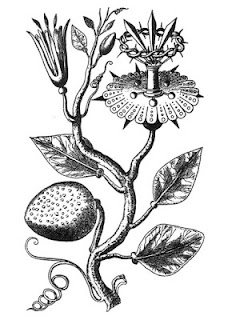 I thought it relevant to include with the unicorn image, because both the passion flower and the unicorn are important in Christian symbolism, and they occurred in the Codex on successive pages. And I like the way the shapes echo and repeat throughout the composition.