No Mud, No Lotus 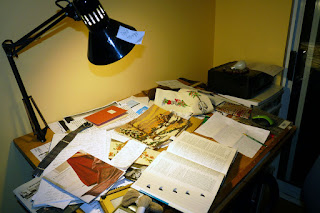 Thanks to all of you who offered helpful advice on keeping organised. It`s good to know I am not alone in a messy studio. But I have also given a bit of thought to what might be behind my untidy habits. 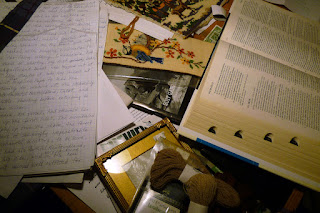 First of all, the whole wide world could be considered a messy studio, where things are created and destroyed and loved and fought over and nobody really knows what the hell is going on.

Then I thought about where my awareness that I am messy began, and remembered that as a child our house was often untidy (with four kids, whose house wouldn't be a mess?) My father, who, as I recall, never lifted a broom or ran the vacuum cleaner, was always complaining about this, and no doubt gave my mother lots of grief about her un-housewifely ways. His line was "What if the Queen comes for tea?" Which seemed to be a perfectly reasonable possibility to my eight-year-old self. I internalized his concern that others might think badly of a messy house, and by extension, of the people living in that mess. As an adult, knowing more about my father`s history and his probable PTSD and other issues, I can take a different perspective.

My art has a lot to do with looking for things beneath the surface, with layers of meaning, with valuing the unlovely. Would I have the ideas I have if everything was neat and orderly? That could be a rationalization, I know, giving permission to the mess. But the pictures of my drawing table are not an inapt metaphor for my thinking processes and the odd connections I make. The trick is making it all come together, which might explain the patient, repetitive, tight little stitches that make up my embroidery.

Last night, on that cluttered table, I came up with three new ideas for pieces that will, hopefully, when they are done, look like they were created in a logical, coherent, skillful and patient way. And I shall do my best to answer the ghost from the past, when he starts to complain: "No mud, no lotus." 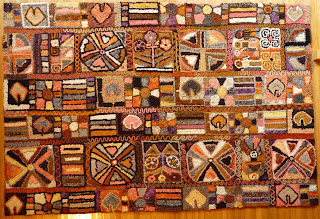 I`ll do a properly lit shot later, but just wanted to show off the piece. I whipped the edges with a medium brown wool that just blends perfectly. I`m chuffed as can be.
creative process making things rug hooking