Lost in the Forest

on May 16, 2017
Today while walking with Gracie on the well-traveled trail behind the medical clinic, I took a detour up a side path to have a pee. (I love peeing in the woods, a habit formed while living on Lasqueti.) In the interests of discretion, I went a little farther up the path than I had in the past. I noticed that it seemed to continue through the forest, which surprised me since I was sure I had gone up that way before and the path just petered out into thick salal.

So I followed the narrow trail and found myself in another world. It was almost like falling through the looking glass. The unfamiliar path, the light slanting through the trees in a different way, the birds chirping  and swooping. I remembered how much I had enjoyed walking with the dogs up old logging roads when I lived in the Kootenays, going where we hadn't been before, getting a bit lost. I love that feeling. I never felt at risk in any way, even though I may have been many kilometers from other humans, and I rarely told anyone where I was going. Yet I am not an adventurer, I just feel safe and protected amidst the trees, and trust the dogs will eventually get me back to "civilization".

But I am probably the odd one out. The fear of being lost in the woods is a foundational myth in many cultures, particularly that of colonial Canada. For years I have carried with me the clipping below. The story captured my attention because it seemed so preposterous. In August of 1909, the Governor-General of Canada, Earl Grey, got completely bushed in just a few hours. I loved how the formidable wilds of British Columbia got the better of him. I pictured someone like Lord Downton being plopped down on the north shore of Jervis Inlet, thinking he would bag a couple of grouse before returning home in time to dress for dinner. The arrogance of the British aristocracy, asserting their privilege to raise a ruckus in the woods and prove their dominance over the land (and Nature). 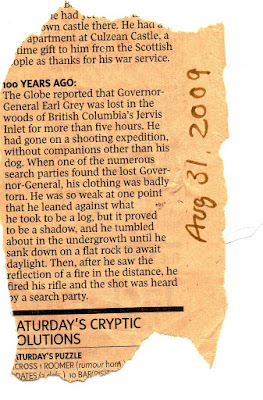 The small clipping has grown into many pages of notes. I have visited the BC Provincial Archives in search of more detail. I have found photographs of Earl Grey performing many official duties on this tour of the west coast, such as opening Vancouver's Granville Street Bridge and being made an honourary member of the Arctic Brotherhood in Dawson City. The story seems a natural segue from the Codex Canadensis work, and so I am about to begin a new piece. It will be an embroidery, on linen, quite big. I'm thinking of something along the lines of a page of the Illustrated News, from the time before photographs were used in newspapers, a precursor to the News at Six.
Am I being disrespectful in making fun of the Queen's representative? Would I fare any better myself in the same situation? Yes, and probably not. But I forge ahead anyway. 2017 marks 150 years of Canada as a nation, yet the celebrations are muted in the wake of Truth and Reconciliation hearings regarding the residential schools that were part of a concerted governmental effort to destroy indigenous cultures. Rightfully, many of the touring exhibitions and commissioned works focused on the sesquicentennial are created by First Nations artists. It is not a time to celebrate our colonial past, but to question it.