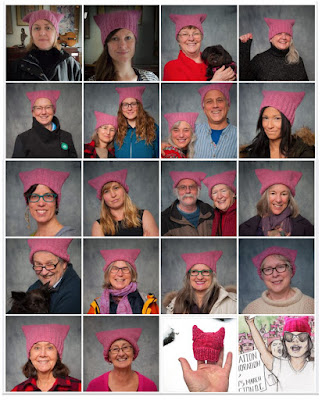 This is from last month, but the pussyhat knitting has been continuing apace. A few days before the Women's March on the 21st, James and I made a pop up photo booth at his studio, and put out a call on Facebook for Gabriolans to come on down and have their picture taken wearing a hat. It was very last minute, but twenty intrepid souls made their way over and we had a blast.

Who guessed that 100,000 pussyhats would show up in women's marches around the world? (That's the estimated number of hats, of course there were many more marchers.) Every single hat made by hand, with intention and care. Woe to the Trumpstiltskin lawyer who asked if they were made in China.

I made six hats before the march - one even went to Washington, DC. I have made several more since, and currently have orders for another four. At first I was just using yarn from the stash, but now I ask people to supply the yarn. Other than that, I am not asking for any compensation, financial or otherwise for the hats. They are my contribution to the resistance.

I was even commissioned by the Gabriola Institute for Contemporary Art to make a tiny hat for the hood ornament of its Mobile Response Unit. Yes, we have some serious fun here!
activism island life knitting