The Year Ends as It Began: On the Path

on December 22, 2016
My friend Jean-Pierre described this piece quite accurately when he commented: "We will enter this disastrous, labyrinthine Native/European relationship together and we will find our way out of the labyrinth hundreds of years from now after many wrong turns and ruinous trials and tribulations."

I do hope we are nearing the end of those hundreds of years, though. For those of you who may not have heard, Canada has been conducting Truth and Reconciliation hearings for the last several years and the final report has just been released.

And the esteemed Francois-Marc Gagnon, author of the book that got me going on this whole project very graciously said to me in an email: "A beautiful piece! Louis Nicolas would have certainly enjoyed all your works and would have probably tried to make the Society of Jesus buy the whole series to decorate the Residence of Sillery." 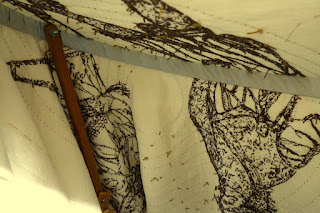 This is what the underside looked like while I had it in the hoop. Yes, I use knots. Bad embroiderer! But what the heck. I am concerned with the image, not the perfection of technique. 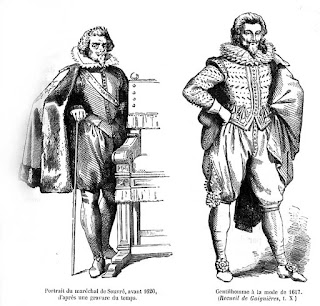 And these two images from the late 17th century may shed some light on what is happening with the arms of the figures. Fashionable men's dress from that time would have included a cape, worn wrapped around one arm. If Louis Nicolas was drawing from engravings, as Dr. Gagnon's research indicates, he may have tried to combine the pose taken from Champlain with a contemporary fashion plate. 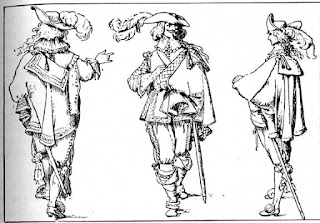 I have a few smaller text-based projects in the queue before I resume the Codex Canadensis series. And damn, I want to get this work exhibited. Making proposals and sending them out is not a task that I enjoy, but it is essential.
codex canadensis embroidery