In Praise of Slow

on November 24, 2016
Slow, ah yes. On one hand, I have been working like a busy bee on my stitching - I have finished Maskoutensak Man and now will move on to the rest of Jacques Cartier. Very thrilled at how it is progressing. And I will be removing the lighter brown threads on Jacques' leg - a "What if?" that didn't please me.

But on the other hand, I have been so demoralized by the month's world news that I have been rendered voiceless. Which led me to find solace in Slow TV, a Norwegian series of real time television, where real people take train trips, chop firewood and make a sweater from scratch. Norwegian Knitting Night, all 8 1/2 hours of it, captivated me. Believe it or not, it had drama, with the focus being an attempt to take a fleece from sheep to sweater in world record time.

Set in a knitting factory museum, it begins with the stalwart Rolf, shearing a sheep (Guri, a Norwegian White) with hand clippers. (It later is revealed that he has placed in the top 10 in world shearing competitions.) He completes this feat in 15 minutes or so and the raw fleece goes directly to the five spinners, who manage produce enough yarn for the two knitters to begin the 40,000 stitches that will make up the sweater. The spinning continues for almost the entire program, although about halfway through two of them switch to knitting sleeves.

Now, don't fall asleep, this is fantastic stuff! The seven member team are all lovely characters in their own right, and their charm, wit, and optimistic spirit is truly remarkable to witness. By the end I felt like they were my friends. There is a supporting cast as well: a bouncy host/cheerleader who sports an array of wonderful handknit sweaters, and the two witnesses, one of whom doesn't appear to do anything other than chew gum and twiddle with her hair, while the other makes sure the team has plenty of coffee and gets to model the finished sweater. And dear Rolf, who is the source of much amusement, stays on through the whole event.

The camera work is awkward at times, but also manages many mesmerizing sequences of spinning wheels, treadling feet and flying fingers. There are equipment failures (a broken needle) and injuries (blisters). The fleece turns out to be a major impediment, being heavy with lanolin and moisture. The bored witness develops into a truly dislikable character, just sitting around looking at her phone while everyone else is working so hard. 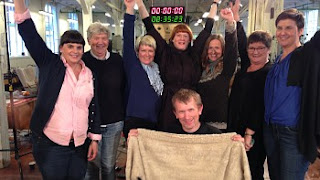 I spun along the whole time, and only managed two skeins of somewhat finer yarn than what they were making. My wheel only has a right treadle, and at about the six hour mark my right hip started seizing up, so I switched to my left foot. I have real admiration for the Norwegian team's accomplishment. Check the show out on Netflix or Youtube.
codex canadensis knitting spinning