The Game is Afoot

on October 23, 2016
As you all know, I love a good mystery. The past couple of days have been very exciting, as I have been on the chase. I could be an art historian yet!

Now, you may recall that I have written before about the source of many of the images that Louis Nicolas drew for his Codex Canadensis. As Francois-Marc Gagnon proved in his introduction to The Codex Canadensis and the Writing of Louis Nicolas, Nicolas's drawings were not made from life. Most often, large volumes of engravings (such as those of Konrad Gesner) provided the models for the creatures he depicted. (Of course, Nicolas often exaggerated the teeth and claws, so alterations seem to have been permissible.)

I have avoided working with any drawings of humans up til now. The politics of a white woman of colonist heritage depicting a missionary`s vision of a First Nations person just felt too fraught. But I have been taking part in a discussion group at the Nanaimo Art Gallery that includes a young woman of the Kitsumkalum nation, who talked enthusiastically about reconciliation and that all people could work with First Nations imagery, given permission and with respect. And that sent me to thinking. And once again to the pages of the Codex.


Above is Nicolas`s drawing of Jacques Cartier. Surely it would be okay if I worked with this image. With the idea of reconciliation on my mind, perhaps I could place two men together, if the context was carefully thought out. I flipped back to plates at the beginning of the book, where individuals from various First Nations were depicted.
And what caught my eye but this man of the Maskoutensak nation? Notice how his posture is identical to Cartier's, right down to the extended index finger? I scanned both images, printed them out and, overlapping them, held them up to the light. The outlines matched almost exactly. Clearly, they were drawn using the same source, and Nicolas altered the details of dress and weapons.

Now, assuming that Nicolas was using a source image, where might that have come from? By chance, I was flipping through another book looking for more of the Du Creux engravings that Francois-Marc Gagnon established were the source of several other drawings of First Nations men, when another illustration caught my eye, this one from Samuel de Champlain`s 1632 volume Les Voyages de la Nouvelle France occidentale, dicte Canada. Look at figure B. The body is turned in the opposite direction but the posture is very similar. The text says the engravings were made from Champlain`s original drawing. 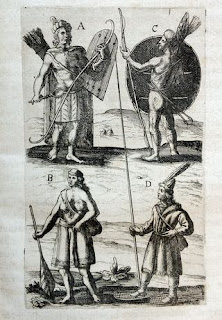 And where might that drawing be found? On an inset of Champlain`s 1612 map of North America, perhaps? (Located in my trusty copy of Derek Hayes' Historical Atlas of Canada.) 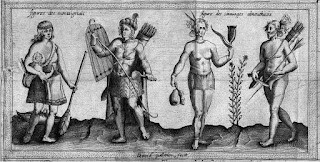 Notice the figure on the left? Facing in the opposite direction of the engraving (but of course, since engravings are by nature reversed), the figure is clearly the one the engraving is based on. The figure is a woman carrying (and breast-feeding?) a child. She holds a paddle in the other hand. Importantly, the Champlain map is one that Louis Nicolas would have had access to.

But this discovery may just be one link in the chain. Champlain`s figure is very sturdy and muscular for a woman, and her breasts are more like well-developed pectorals. Perhaps Champlain used yet another image as his source? Down the rabbit hole! 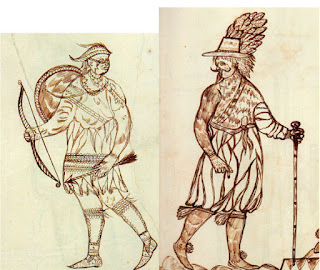 Well, maybe that is a search left best to the professionals. I am playing with Cartier and the Maskoutensak man, reversing and juxtaposing. I love how they are looking eye-to-eye, and could be doing a little do-si-do. My next piece has begun!

P.S. Re: Jean=Pierre`s comment below. Here is the very familiar image of Jacques Cartier, painted by Theophile Hamel in 1844. Complete artistic license at work, considering there are no known contemporary images of Cartier. 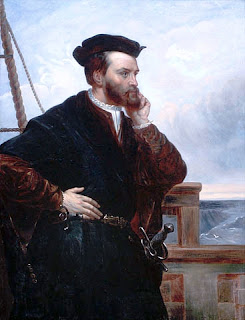