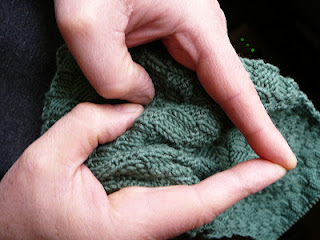 Well, the previous post had a predictably tepid response. That's okay - it was probably more important for me to say it that for anyone to hear it. I've been biting my tongue for too long.

Here's a little backstory. I started reading the Yarn Harlot when she first started out. As Stephanie freely admits, her timing was perfect. Blogging was taking off, knitting was having a huge revival, she was a sassy, charming writer and quickly found a hugely appreciative audience. Her fame grew, she got a book deal, she started being invited to knitting events, and most notably she has raised millions of dollars for very worthy causes through her blog. I admire her greatly.

But as the years went by somehow the balance shifted. More and more posts were written while she was on the road. I understand that knitting became her livelihood. She was (and continues to be) a superstar amongst knitters. Her personal fame became the draw for knitting retreats, conferences, book sales and other manifestations of the industry. To her credit she hasn't had her name slapped on a line of yarn or knitting gadgets, and she is very supportive of small businesses. And I doubt very much she has become personally wealthy despite her success.

Still, Stephanie travels. A lot. Way more than most of us. She writes frequently about waiting in airports, losing luggage, getting sick after being in a plane full of coughers and sneezers. But airplanes do a lot of damage to our planet's atmosphere. Those who want to fly in good conscience have the option of buying carbon offsets that supposedly fund good things like planting trees.

For quite a while now, reading Stephanie's posts about her travel experiences have been irking me. Sure, I could simply not read her blog. I have taken breaks, but, like so many people, I feel that I have a somewhat of a relationship with her. She is a good writer. And every now and then she hits it right out of the park.

The thing is that I feel she has been co-opted by the knitting industry, admittedly a small cog in the juggernaut of capitalism, to keep the money-making wheels turning.  All the good things she has shared about knitting - the peace that comes from the meditative stitches, the warm fuzzy feeling of making things for someone you love, the pleasure of mastering a skill, have nothing to do with money. I suspect Stephanie is enough of a lefty to see the irony in the situation.

Which is why I tried to gently suggest a rethink. I believe she has power in her position - she has already effected all kinds of positive change in the last ten years. Why shouldn't a knitter take the lead?

I'm not trying to criticise people who fly once or twice a year to see family or go on a special holiday. And I know many people have jobs that require a lot of travel. In my small and happy dreamworld, teleportation or some other carbon-free transport would be the norm, but we aren't there yet. But how does change happen? By realizing there is a problem, and resolving to find a solution.

I have lived in a lot of different places: cities, villages, islands. I have been an environmentalist all my life. In fifty years of personally re-using and recycling, riding a bike and taking public transit, growing my own food, and reducing my consumption of manufactured goods, I have seen some change, but it is two steps back for each one forward. I fear greatly that we are killing the planet.

And, on that bleak note, I will return to doing what I can.
activism knitting