on March 01, 2016
It's not that I miss my youth, or would like to return to it. I just wish I had known then what I know now. Not to avoid the mistakes I made, as I think making mistakes is part of the process. I'm thinking of how much wiser I would now be, knowledge and insight accruing as they do.

What brings me to this philosophical juncture? Last night I went to see a couple of young female singer/songwriters at the pub. I left a bit early, thinking that although the performers were talented and thoughtful, they were covering territory I had been over so many times before. When I got to the car, I couldn't find my car keys. I found myself looking through my purse for them, not once, not twice, but four times, finally finding them in a safe inner pocket that I never use. Each time through I thought of all the possible scenarios: I had dropped the keys on the road; I would have to retrace my steps to the pub; did I leave the keys on the bar; this was my penance for leaving the show early; I would have to leave the dog in the car and walk up the hill in the dark to my house to get the spare set of keys. My anxiety was increased when I poked my finger on something sharp during my second rummage through, and rose further when I realized I had been stabbed by the unclasped pin of my Garden Club badge (expired.) It is a discomfitting thing when the detritus of the safe and tidy past draws blood. It made me think I am finally and truly in my dotage.

No, I'm not in the market for a red sports car.

But I did return to the Improv Round Robin quilt top I made last fall, which I was less than happy with. I've spent the last few hours rejigging some of the blocks, and pinning the layers of top, batting and backing together. I'm just dithering now on whether to hand or machine quilt it. 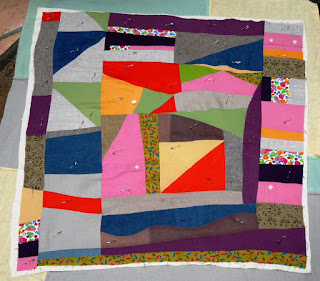 Not exactly revolutionary, is it? Oh well, at least I didn't poke my fingers with the pins putting it together. 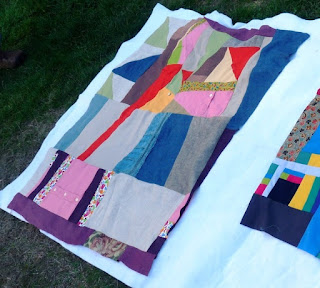 That's the original quilt top on the left. I confess I actually took parts of it apart on the ferry on the way home from the workshop, somewhat remorseful that I was undoing the hard work of my fellow workshop participants, but not remorseful enough to relinquish my pathological need to control the fabric. To me, some of the sections were lazy or boring. It's hard to say if my revisions were anymore interesting or daring, but taking apart and putting back together was just the tonic I needed to get over the car key incident.
making things nuts she's nuts i tell you quilting