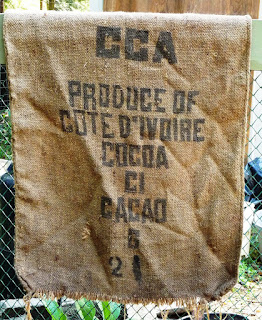 I found a sack of burlap bags in my garden shed that were musty smelling, so, since it is a sunny day, I hung them on the fence to air out. The one above caught my interest, as all the others were for coffee beans from El Salvador. This one once held cocoa beans, and it twigged a vague recollection of how cocoa from the Ivory Coast was produced with child labour at the mercy of evil multinationals. Somehow the materiality of the burlap sack made the issue real and tangible for me, not just a shadowy image on a screen. That kind of information I rarely delve into, as it only reinforces my despair about the world.

But this time I did do a little research. The "CCA" on the bag is an acronym of the Cocoa and Cashew Association, which seems to be the marketing arm of the industry in Cote D'Ivoire. The website is full of business speak, and it's difficult to figure out whether the association supports child and slave labour, and deforestation, or not. ECOM Agroindustrial Corporation, Ltd., one of the major producers is based in Switzerland, and has a similarly mealy-mouthed website. Stories about how the cocoa industry destroys the habitat of primates are easily found, as are articles about child slavery. The cashew industry seems to be next up on the list of producers of first world treats that we get to enjoy at the expense of human lives on the other side of the world.

I have always chosen fair trade, sustainably harvested (at least it's labeled that way) chocolate just because it tastes better. And because it's also expensive, I savour it slowly. But today is Easter, the time of celebration of all things chocolate, and my conscience being twigged by the discovery of a sack that once held cocoa beans seems especially timely. I do hope that everyone enjoys their chocolate Easter bunnies today, but next year, please think about seeking out fair trade, slavery free, organic, sustainable treats.

And, I was going to say "on another topic entirely", except that both of these articles in today's NY Times are reviews of contemporary American artists who happen to be black, and whose work addresses issues of race and class that inevitably connect to the history of slavery and discrimination in that country, which of course has its roots in international economics and European imperialism in Africa.

Rodney McMillian uses discarded furniture to talk about race in the United States. The reviewer says:

Such work can be seen many ways, though one will inevitably be as a portrait of the fabric of contemporary American society. “It feels like that fabric is very fragile right now,” he (McMillian) said, “and all it would take would be one string to pull it all apart. But maybe that would be a good thing — a time that could lead to some kind of radical change.”


And the "genuinely political, the genuinely beautiful and the outrageously magical" work of  David Hammons shows him to be a shapeshifter and trickster in the best kind of way.This is exciting, dynamic, engaging art - I would love to see it in real life.
activism art food