I Know, It's About Time! 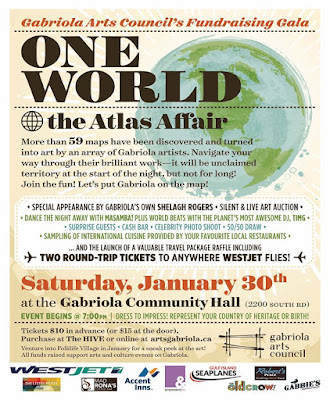 The following is a little article I wrote up about the map. Those of you who follow along will notice some repetition, and there might be a little too much information. Thanks for bearing with me. This is intended to go along with the piece when it is auctioned off on Saturday night. I just found out the Gabriola Arts Council is accepting advance bids by email, so if you might like to give this piece a home, send your bid to alina(at)artsgabriola(dot)ca. I have it valued at $800 (Canadian! Our dollar is worth .70 US), the live bidding starts at half that. If nobody tops your bid, it's yours! The bidding will be conducted by Shelagh Rogers, so it should be a lot of fun.

I've been spending a lot of time with this map, wanting to understand it, not simply transcribe it. It appears to be a fairly close copy of the map drawn by Louis Joliet on his 1673 trip down the Mississippi to find its mouth, and to determine if the river provided access to the Pacific Ocean. Accompanied by Jesuit Jacques Marquette, they made it as far as the Arkansas River before encountering indigenous people who had muskets, indicating there had been contact with the Spanish, who the French wanted to avoid. The expedition turned back at that point (marked on both maps at 34 degrees latitude), and Joliet made it all the way home to Quebec where he could present his map to the Jesuit administration.  (A slight glitch happened when his canoe capsized in the Lachine Rapids, and his notebook and map were lost. He re-drew the map from memory.) Joliet was lauded as a hero, and rewarded with his very own island in the St. Lawrence, Ile de Anticosti.

At that very same time, Louis Nicolas was in Quebec. He must have been very excited about Joliet’s epic journey. He drew a version of the map, in his own inimitable style, and included it as an end paper in the Codex Canadensis. His version includes a very large rattlesnake and a many-toothed armed fish. The mouths of both align with the mouth of the Mississippi. (Coincidence? I don't think so. Undertaking a journey into previously unmapped territory must have been frightening, and perhaps like entering the mouth of a ferocious creature.)

Nicolas made a fairly faithful copy of Joliet’s map, although there are some interesting and quirky differences, apart from the alarming serpent and fish. In the cartouche of Joliet’s map he gives credit for the expedition to Marquette, whereas Nicolas just attributes the journey to “missionaires”. The site at the centre of Jolliet’s map, east of present-day St. Louis, shows a figure of a small human with the words “Manus: Statue ou les sauvages vont faire leurs adorations.”  "Manus" is Latin for hand, and the French translates as "Statue where natives worship". Nicolas has substituted the word Manitou for Manus, Manitou meaning spirit. (He also calls the whole territory Manitounie. Nicolas was an adept speaker of the Algonquin language and published an Algonquin grammar after his return to France.) He shows a larger figure, apparently made of stones, with a fierce face, instead of a realistic human. (I have not been able to identify the site, or find mention of such a seemingly important spiritual place, in my research, although there are several ancient mounds in the area.) Joliet calls the body of water that is now Lake Michigan “Lac du Michigan ou Illinois” while Nicolas simply calls it “Ilinois”.

On the other hand, Nicolas repeats Joliet’s assertion that horses and camels roam the territory west of the Mississippi, and he also uses the same terminology for Green Bay – Baie de Puants. (Puant means stinking in French). Both maps show iron mines and the area of “charred earth” north of the Illinois River. (This corresponds to the First Nations practise of deliberately setting fire to certain areas to keep vegetation down, possibly to make hunting easier.) Both maps roughly show the route that was followed by the explorers on their journey – “chemin de allee” and chemin du retour”, although they travelled primarily on water, not overland as the dotted lines seem to indicate. And, confusingly to modern eyes, the compass on both maps positions north to the right.

The most striking difference between the maps is stylistic. Joliet’s map is clear and not overly expressionistic, with the exception of a couple of very odd looking bison, or “bouef des sauvages”. Nicolas, however, indulges in his characteristic zig zag marks to indicate water, his mountains are voluptuous, and he gives almost the same amount of space to his creatures as he does the map itself. Contrast his rendition to a map drawn eight years later in France by Malchisedech Thevenot. (Now THAT'S a name!)

And what makes my rendition different, especially considering I strive to duplicate Nicolas’s marks as faithfully as possible? I have not added any elements to the image other than signing it with the initials of Monsieur Louis Nicolas, Pretre and my guess at the date (MLNP 1673), as well as my own initials and the year I made the piece (hmc 2016). Although I suspect Louis Nicolas would have been aghast to know that some woman over 300 years in the future would be paying such attention to his work, I consider what I produce to be a co-creation with him. (Random note to self: In the movie version of LN's life story, the actor who plays him should be a cross between Rowan Atkinson and Benedict Cumberbatch.)

My decision to duplicate his pen and ink lines using needle and thread changes his drawing physically, and adds a layer of conceptual intrigue. Even the finest thread has thickness, and I am in love with the way a stitched line has three dimensions.  It is a subtle thing, I admit, but I believe an important one, as it returns corporeality to the flat image. Depending on how the light hits the stitching, a shadow is cast, one that changes as the sun moves across the sky. Somehow the piece inhabits a space between diagram and territory.

As well, stitching is much slower than drawing, even if one has to stop and dip the quill into the inkwell every time the ink runs out. This slow pace allows me to focus my attention on the image with an intensity that feels almost devotional. Every movement my needle makes is carefully attuned to the nuances of Nicolas’s ink line.

However, the astute viewer of the piece will notice fairly quickly that I have not stitched every bit of the image. All the lettering is drawn by hand, using an archival ink Pigma pen. I could have stitched the letters, but because of the scale, I felt I could achieve a better result by returning to my early training in graphic design and rendering the letters in ink.

I also felt that the rivers, tributaries, islands and coastlines are physical realities, whereas the names attributed to them were assigned by humans – and vastly changeable depending on language. By embroidering the geographical features of the land, I am ascribing a permanence to them that doesn’t extend to words.

One final note: I lived for a year in Minneapolis, two blocks from the banks of the Mississippi and St Anthony's Falls. A reluctant resident, all the art I made that year was about Canada. I never really learned much about the great river I walked along almost every day. 25 years later, I have traced its path from headwaters to mouth, explored its tributaries, and learned of the aboriginal people who first travelled up and down it. My thread connects past and present, and allows for the discovery of things I would never have imagined.
codex canadensis documenting the work