Word for the New Year

on December 21, 2015
At our "Monday Matters" rug hooking get together yesterday, we celebrated the winter solstice and shared our "words" for the new year. This practise seems to be fairly popular these days, and I can see how choosing an apt word sets an intention, or a direction and can lead to a fruitful outcome. I usually throw myself to the Fates, and my life probably reflects that!

About mid-way through 2015 I realized that a word had chosen me, and that word was path. It's a pretty obvious word - after all, everyone is on a path, right? ( I wrote about it here.) My revelation was that there are always paths in front of us, and they are created by others who have gone before. (Just as great minds might create paths of philosophy or art, deer in the forest create paths down the hill to the water.) It was a comforting thing to realize.

The other day, while transferring the Louis Nicolas map of the Mississippi to linen, I noticed there were two dotted lines connecting rivers over some distance of land. These were labelled chemin du retour and chemin de l'allee, which translates as "return path" and "outward path". (Thank you Blandina for correcting me!) More paths! I take it as a sign I'm on the right one. 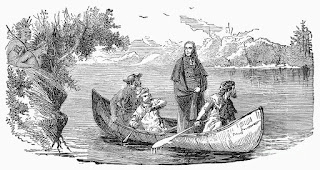 I've been spending a lot of time with this map, wanting to understand it, not simply transcribe it. Interestingly, it appears to be a fairly close copy of the map drawn by Louis Jolliet on his 1673 trip down the Mississippi to find its mouth. Accompanied by Jesuit  Jacques Marquette, they made it as far as the Arkansas River before encountering indigenous people with muskets, indicating there had been contact with the Spanish, who the French wanted to avoid. The expedition turned back at that point, and Jolliet made it all the way home to Quebec where he could present his map (with great fanfare) to the Jesuit administration. And guess who else was likely in Quebec at that time? Our dear Louis Nicolas, who must have been very excited about this epic journey. 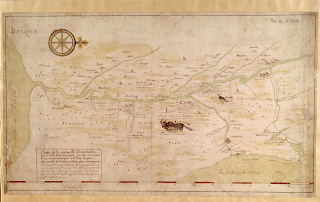 And so, he drew a version of the map, in his own inimitable style. The mouth of the rattlesnake and the many toothed fish parallel the mouth of the Mississippi. (Coincidence? I don't think so. Undertaking a journey into previously unmapped territory might have felt terrifying.) 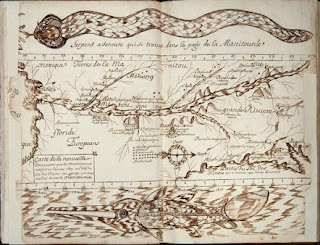 Which is kind of a roundabout way of telling you what my word is for 2016. Chemin. French for path. I think it's apropos, as Canada is a bilingual country. I may be a dunderheaded anglophone, and a westerner to boot, but somehow I am being beckoned a la Francais. Who knows where it will all lead?

PS: The first order of business is to figure out how to get the French keyboard to work. It bugs me that I don't know how to put accents in the proper places. Is that nerdy or what?