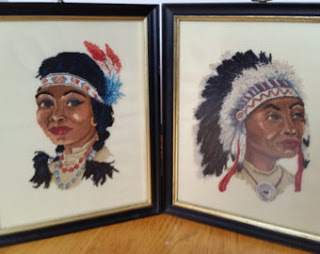 Today I bought a pair of beautifully stitched, matted and framed petit points, identical to the pattern above. I bought them because every time I passed them on the wall of the thrift store, I cringed. I bought them to get them out of circulation, not because I have a secret collection of cringe-worthy needlepoint stashed away in the vault.

What do such images mean in today's world? Just yesterday, Canada's Miss Universe contestant was raked over the coals for wearing a dress reminiscent of a totem pole. The Truth and Reconciliation report was recently tabled, prompting hopeful talk for the beginning of a new phase in the relationship between First Nations and non-indigenous Canadians. In conjunction, the Canadian Museum for Human Rights has unveiled a powerful installation by artist Carey Newman. (And, thank you Jean-Pierre for suggesting this, Kent Monkman certainly says it all better than I ever could.)

The above petit points are stereotypes at best, reprehensibly racist at worst. How can one make sense of them? After all, they exemplify one of the things I am always going on about, the skillful labour of the human hand. What baffles me is how someone could work so long and carefully with such imagery. The patterns date from the 1980's, not that long ago, and certainly a time when they would have been considered kitsch, if not recognised as politically suspect.

It is possible, I suppose, but highly unlikely, that they were stitched by a First Nations person. Petit point is a technique of white Europeans, a showpiece to beautify the home and a sign of refined cultural sensibilities. Maybe the lady who stitched it had a fondness for indigenous people and sought to honour them with her time and stitching talents, but I find that hard to swallow. Even if her intentions were well-meaning, how could she reconcile the cartoonish imagery with the real people she knew? Most likely she just didn't think it through. It's not like embroidery was considered a moral or intellectual undertaking at that time.

I also have a pair of petit point images of a little Dutch girl and boy, and a matched set of 18th C. French aristocrats, all gleaned from thrift stores. It's a trope of popular needlework patterns, the male and female figures, probably going back to Adam and Eve. They are easy to make fun of, and lend themselves readily to subversive intervention. But the Dutch and French figures aren't as weighed down with such political baggage.

What the heck am I going to do with my new acquisitions? My urge is to deconstruct them somehow, to respond to and transform their meaning. But, as a white person, do I have the right to say anything at all? Maybe they require a ritual burning, or would that be censorship, an unwillingness to acknowledge the ugliness that lurks beneath the surface of even the most innocuous seeming objects? Right now, I'm struggling with their very existence. Does that seem all too academic and PC to you?

It's hardly a subject for the holiday season, I suppose. Or maybe it's an apt one for a time when we're all talking about peace, goodwill to all, and new beginnings.
craft philosophy secret life of objects thrift stores