Ode to a Lost Art

on December 15, 2015
I finally got the vintage drafting table I bought last summer cleared off and sat down to do some cutting and splicing of the artwork for my next Codex Canadensis piece. The feeling of being at the board was so familiar and comfortable, it was amazing to realize that the last time I worked as a graphic artist was back in 1988. The olden days, I call them, before the whole industry went digital. For a fairly accurate and amusing account of what that work entailed, check out this link to Design Before Computers Ruled the Universe. I didn't exactly foresee that my trade would soon be obsolete, but the clues were there, and I chose to return to school to study "real art". (Yes, a brilliant career move, I know! I've never earned more than I did at that last graphic design job.)

If I had stayed in graphic art, I would have been working on a computer in short order. I would have hated it. One of the things that I loved about doing paste up the old fashioned way was the skill involved. I had mastered my tools, and although the content of what I was assembling was often of dubious value (I was putting together ads and flyers for a large department store chain), I was confident in my skills and the controlled physicality of the work was very pleasing to me.

And that feeling came right back the other night as I wielded my X-Acto knife and straight edge, cutting and splicing a patchwork of photocopies together. My eyes, wrist and knife worked in unison. I could feel by the way the knife sliced through the paper if the blade was getting the tiniest bit dull. I realized it's all about tactile sensation. I remembered how I could tell by the delicate pull of the ink if my Rapidograph had a clog or was running low, and how I could lay down Letratape with just the right amount of tension so it would sit on the board perfectly straight, without stretching.

There is no demand for such skill these days. Even though there has been a revival of letterpress and other antiquated processes of the printing trade, I can't imagine anyone continuing to do paste up the old fashioned way. The camera-ready artwork I prepared was called a "mechanical", and in retrospect I can see that I was part of a machine. The same end result can now be achieved by a silicon chip.

And, really, it was not often creative work. That would mostly be done by the art director or designer. Some of my freelance jobs allowed me to come up with concepts and layouts for which I would also order the type and do the paste up. But the people I worked with were usually smart, funny and interesting, the pace was fast, and it was satisfying to hold the finished product in my hands.

Although the trade may be obsolete, the skills have not been entirely lost. I notice a similar sensation of hand and tool moving as one when embroidering a piece of cloth - I can feel the intersection of warp and weft with the tip of my needle and dive the thread through the opening in one smooth gesture. When cutting cloth, I can feel if my shears are running true along the grainline. It is a kind of communion with the material that requires patience, attention and practice to become second nature. 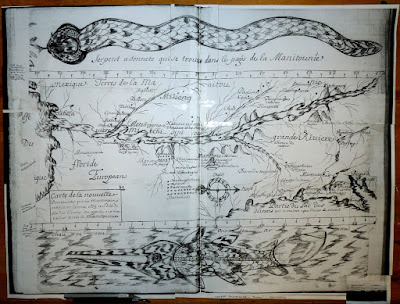 Above is Louis Nicolas's map of the Mississippi that I am re-creating for an Arts Council fundraiser. Twice the size of the original, the images top and bottom will be embroidered, as well as the rivers and coastlines. I will render the lettering in ink as a concession to time, accuracy and the inevitability probability that it will be auctioned for a price much lower than I would normally ask.

But then again, it's a chance to re-awaken some more of my old graphic skills. An art director once told me he only hired people who could render 4 point type with a brush! Those were the days...