on November 27, 2015
And here it is! Four hundred and fifty hours later, I think I'm done. As Ursula Le Guin says in Steering the Craft:

The judgement that a work is complete- this is what I meant to do, and I stand by it - can only come from the writer (artist), and it can be made rightly only by a writer (artist) who has learned to read her own work.

Well, maybe I'm not QUITE done. I'm debating about whether to add fringe. (I can just imagine you recoiling in horror, "No! Not fringe!") I know, it's probably too home ec-y. Just that gonfalons - the ceremonial banners that I have taken the shape from - usually have fringe, and I think the right fringe would add some weight to the bottom edge, which maybe it needs. I photographed it outside, and it does catch the breeze. I could always use drapery weights in the hem, I suppose. Comments yea or nay much appreciated. 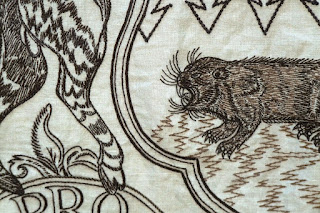 Here's a couple of details. I re-embroidered the treeline with coral stitch, which adds more heft and I think works well in the overall design. 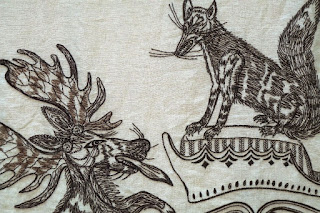 The left elk and fox sharing a perpetual moment. I decided I wasn't too bothered by the unsupported hind foot of the fox, so it is unchanged.

The wooden pole from which the banner hangs was a dead balsam fir tree in my yard this morning. Yesterday I found what I thought was the perfect branch, a windfall alder, but once I peeled the bark off I discovered rot in several places. The dogs and I looked for another suitable branch on our walk this morning, but couldn't find anything. (Yes, I am that crazy lady who talks to the air, saying "No, that one's too curved, that one's too thick, that one looks rotten.") Then we returned home and I saw the perfect straight narrow stem over by the fence, so I got my saw and cut it down. It had already died so don't worry, no trees were harmed in the making of art.

Now I just need a place to show this off! I'm still trying to get an exhibition.
codex canadensis embroidery island life