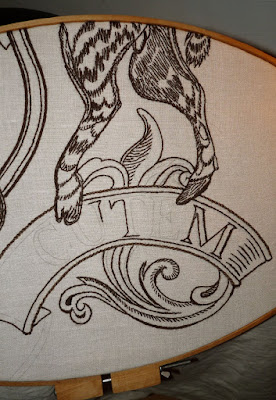 One of my problems anyway. If only they were all so straightforward! I had been having a ridiculous amount of difficulty with the flourish part of the motto banner. There were problems in the initial drawing (copied from an old Hudson's Bay coat of arms), and then I must have unpicked it three times in the stitching before I reconciled myself to the fact that I had to redraw it. 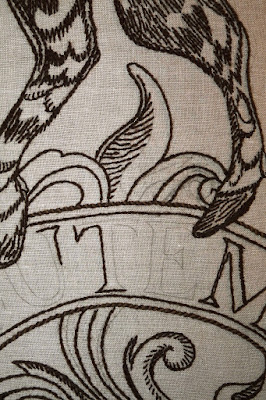 As you can see (I hope) in the closeup, I have a lot of pencil marks to remove. The arcs of the flourish above the banner didn't connect with the ones below. Even though this is a minor element of the whole image, my eye kept wanting to connect the lines. They still don't do it perfectly but as much better than they were.

What this little exercise made me very aware of is that Louis Nicolas's lines are so organic, expressive and quirky compared to the  formal, stylized arcs based on geometry. Who could really tell if I made a mistake on one of the animals, since the images I am working from are so individualistic ?

But it all has to work together. I am very pleased with the way the top, bud-like forms of the flourish echo the shape of the space between the elk's hind legs.

Now, my next problem is that I am rapidly running out of yarn and I have a whole elk and the rest of the banner to go!
codex canadensis design technique embroidery Louis Nicolas