on June 11, 2015
Well, I did ask for it a couple of posts ago. I fretted about the meandering path of my career and BOOM! The universe answered. All in the space of a week, I have been presented with four examples of artists who have faced changes of direction in their careers, with unexpected results.

The first is one you may already have come across. Judy Martin's post Women's Work, Women's Worth has a link to this great article by The Pale Rook. (And Judy found the article through Arlee Barr. I love how we share.) I'm sorry that I don't have more info on who The Pale Rook is, but her thoughts about how we value our work are well worth reading and pondering. She touches on the crucial issue of "If we don't take ourselves seriously, how can we expect anyone else to?" - something that I certainly have experienced all my life. 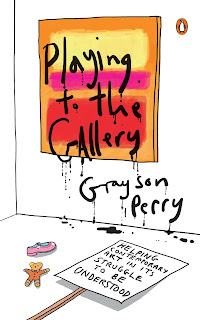 Second up was Grayson Perry's terrific, witty little book Playing to the Gallery, based on his BBC Reith lectures. Perry achieved fame and fortune after labouring for twenty years in poverty, winning the 2003 Turner Prize and joining the Saatchi gallery's stable of artists. He is known for his use of traditional media, particularly pottery and tapestry weaving, to question gender and masculinity. Playing to the Gallery is aimed at a general audience as it attempts to explain the contemporary art world, but is especially fun for any artist who has attempted to navigate the treacherous waters between art school and an actual career. (If you prefer listening to reading, the four lectures are available on YouTube.) 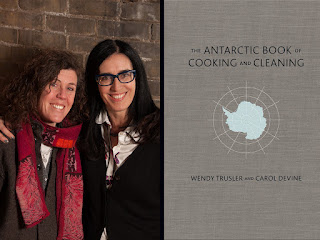 The third and fourth examples are people I went to the Ontario College of Art with. That they both popped up in the same week after twenty years of silence has to be a sign of something, and I hope it's not just a coincidence. Wendy Trusler's name appeared in my browser as the co-author of a new book titled The Antarctic Book of Cooking and Cleaning. When I knew her, she was in the Fine Arts department, but in the years since leaving school she has honed her skills in other media, and used her talents in cooking to travel the world, most notably Antarctica. Her publisher says "The Antarctic Book of Cooking and Cleaning is a unique journey through an austral summer, when a group of dedicated individuals--fifty-four people from five countries--picked up nearly three decades' worth of garbage during a three-month period in Antarctica." She looks just like I remember her in the author photo, (she's on the left) and I can't wait to read the book. She still makes art, and has been shown in galleries, but it appears she has extended the open mind and engaged spirit she developed in art school to encompass all aspects of her life. Way to go, Wendy!

The other former art school friend has taken a completely different route. I heard that Joe Smith now lives on Lasqueti, the same island paradise I was lucky to live on for four years. In the old days, Joe was what I considered to be an intellectual and passionately discussed political and critical theories. After finishing school, he used his formidable communication skills as an advocate for sex trade workers. He also worked as an escort for a number of years and I have to respect his commitment to walking the talk. He doesn't have a new book or artwork to promote, but he seems to have created a good life for himself. And Lasqueti is a great place to end up.

So who am I to fret, other than its a fairly normal thing for humans to do? Artists may face more challenges in their lives than accountants, say, but I'll bet our lives are more interesting and full. I knew it was never going to be a sure thing when I started out, and it's unlikely that I will reach the diamond-studded destination of so-called success, but I'm happy just being on the path.