It's All a Learning Experience

on June 13, 2015
I am really itching to start another Codex embroidery, but wanted to finish off a couple of other projects first. Here's the Gabriola Hookers mat with a braided edge and a few more embellishments. 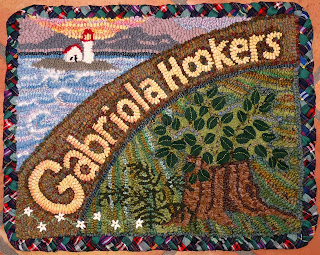 This time I nailed the butt end join, but the braiding suffers a bit from my choice of three differing weight fabrics, one of which had a lot of synthetic in it. It was very difficult to get an even braid. I also used Braid-Aids this time ( a kind clip that is supposed to fold the fabric for you as you go) and found them clumsy and ineffectual. But they weren't brand name Braid-Aids so maybe the real thing would work better. I was so unimpressed by my clips that I threw them in the garbage, just so I would never be tempted to use them again.

And this time I didn't do an extra wrap at the corners, which means they are not as square. But heck, this is just a sign that will come out when our group has an event, so I won't have to look at it every day. There is a limit to fussiness.

I also added some little felt flowers for the trailing vine at the bottom. The leaves on the nurse stump, which are supposed to be salal, were way too frustrating to hook so I cut leaf shapes from green cloth and simply stitched them down the middle. This lets them curl a bit and be more three dimensional, which feels more like salal to me. I also did some big French knots for the salal berries. 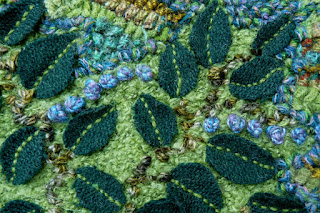 And the most non-traditional thing I did was use a piece of a felted lime green sweater for the background of the leaves. I cut out the shape, tacked it to the burlap, and hooked right through it. This would only work for a display piece and would certainly not be durable for a real rug, but was a quick and effective solution to a problem I didn't want to spend hours dealing with.

Now I can get on to some real fussiness - Canada's national symbol, the beaver, in all the gnashing-toothed glory that Louis Nicolas could muster!

P.S. A shout out to Eileen Fry, an old friend from Nelson, BC, who left a very nice comment on the Gabriola Gallery Facebook page. Thanks Eileen, I have to get back to the Kootenays sometime soon!