on February 04, 2015
Judging from the plummeting stats after the previous post, my suspicions that photos of very slow stitching projects are about as popular as watching ice melt have been confirmed. Or maybe that big snowstorm back east has knocked out half the continent's electricity. Oh well, it's a good thing I don't rely on blog hits for my self-esteem, and the lovely comments I do get are pure gold.

So, given that the stitching is still proceeding at a glacial pace, I will offer you a post that I wrote back in December, but didn't publish because I thought it might be a bit caustic. Looking back at it, I still think what I said is valid. But you be the judge of that! (And for those who make it all the way through, there's a little book review at the end.) Here goes:

Nobody has ever accused me of winning any personality contests. If anything, I'm more of a Nasty Girl, pointing out things that might be better ignored if I wanted to win friends and influence people.

What's the bee in my bonnet this time? Well, I recently received an email from an artist I know peripherally through the blogosphere, someone I think is an inspiring and genuine innovator, someone who works from the heart. A good person, in other words. This person has a book coming out, a book that I am excited about, one that I think deserves to have every success.

So what's the problem? The email I received was basically a set of instructions of how to support the release of this new book. How to tweet and link and like and use my blog as a platform to spread the word. All things I would be happy to do, and might have even done without prompting. But the questions that leap into my mind are:
"Where the hell is the publisher in all this?" "Since when did book promotion become the job of the author?" "Why are the author's friends expected to be willing (and unpaid) helpers (pawns) in a promotional campaign?" "Is the world of publishing so desperate and competitive that they think nothing of basically stealing MY time to do something that a) is their job, and b) is taking advantage of my good nature, even if it is to help out a friend?" "And what about the poor author being pressured to take on the task of marketing their book - wasn't writing it enough?'

I'm increasingly resentful that social media has been designed and manipulated by mercenary corporate interests to such a level that is is assumed that everyone will just mindlessly hop on the bandwagon. Worse, even good, decent people with something positive to share with the world have to hop on to that bandwagon too in the hopes that their voice might be heard.

I have another friend who came out with a book a couple of years ago. She had a marketing background, so doing all the promotional stuff just came naturally to her, I guess, and the book was quite successful. She has said to me a couple of times, "So when are you going to do your book?" I must confess that I have kicked a few ideas around, to the point where I actually got a copy of a guide to publishers. The advice therein was sobering. Apparently it's not enough just to have a terrific, original, wonderfully articulated idea for a book, and proven ability to write such a thing, but one must also have a presence on social media, a following that can be relied upon not just to buy the book, but to create such an online furor that everyone else will want to buy it too. Talent isn't enough, you have to have personality and influence too.

Yes, I have a blog, so I'm part of the system, I suppose, but I don't do Facebook or Twitter or any other annoying forum for superficial human interaction. It's a cacophony out there, and I value my peace and quiet. I'm not going to add to all that noise. 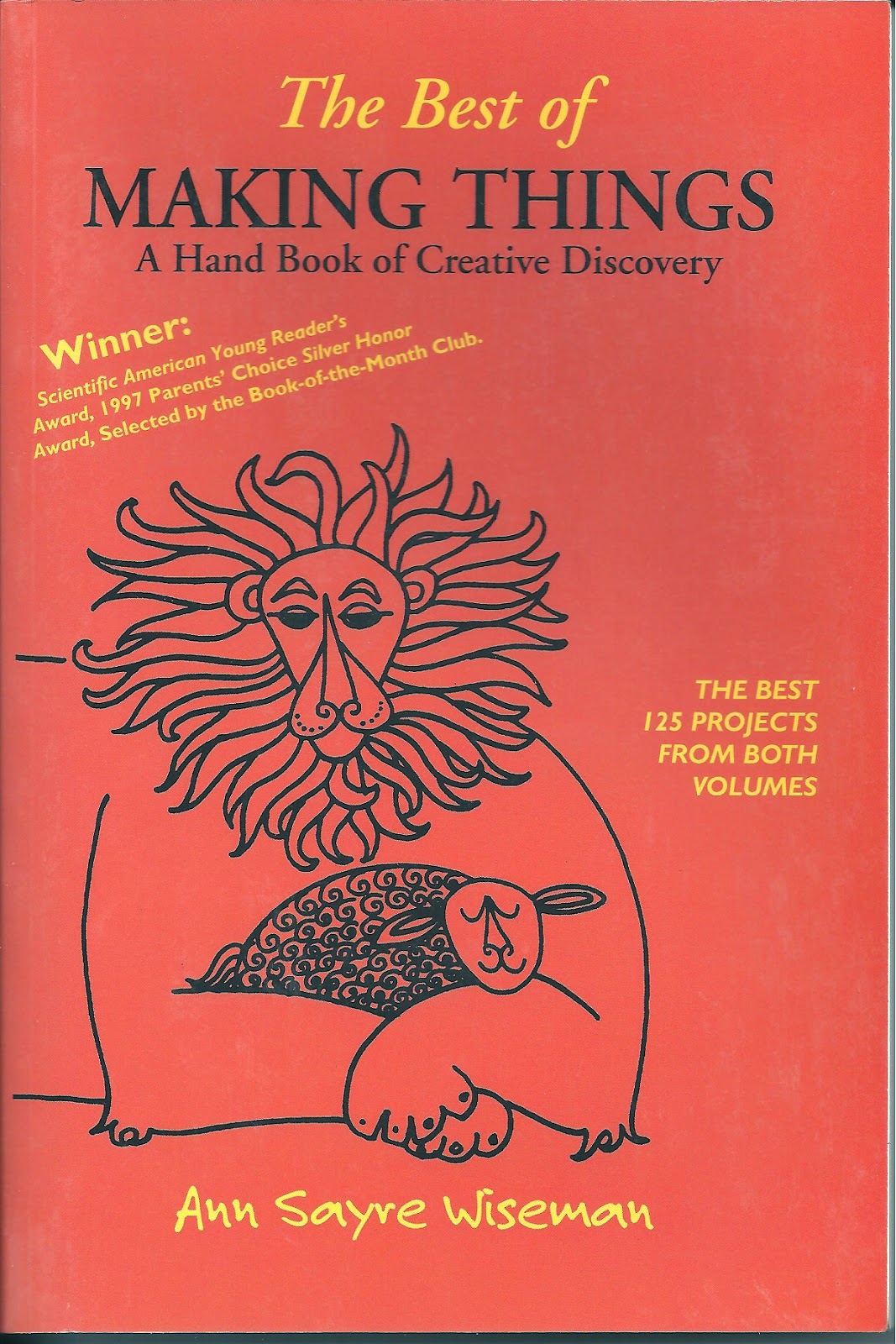 I got this little gem, The Best Of Making Things, from the library the other day. The funny thing is, I'm sure I also got it from the library over forty years ago, when it was first published. In fact, I remember making quite a few things from this humble little book. Illustrated with simple, clear line drawings, it is far more inspiring than any of today's beautifully photographed craft/coffee table books. It covers all kinds of art activities from jewelry making to book-binding to weaving, sculpting and music making. Best of all are the words of encouragement and support sprinkled liberally throughout. Author Ann Sayre Wiseman was an educator, and I envision her as the queen of beloved primary school teachers. It's not surprising the book is still in print, the methods and projects are timeless.
And I attest to the truth of her opening words:


Remember, you know more than you think you know. And what you learn now in your early years will last longer and be firmer in your memory bank than anything else you will learn later.

I have no doubt that Ann Sayre Wiseman was an early influence on me, even if I forgot her name, and indeed, even the book, until coming across it again so recently. I was fortunate to have good teachers, to be educated in the halcyon (ie. well-funded) days of the 1960's and early 70's, and to have a love of libraries instilled in me by my parents. I first learned many of the crafts I do to this day from books. Will future generations be able to say that of the craft books being published today? I wonder.
book reviews