on February 27, 2015
Gardeners come in various guises. There are plant collectors, and orderly types who prune and mulch in neat rows. There are rich gardeners who hire landscapers and those who spend all day on their knees with dirt under their fingernails. One thing they all share is that they have a vision, some grander than others.

Me, I'm sort of a work with what you've got kind of gardener. I have been a renter at most of the places I have gardened, so have to be aware that when I leave the next person might not have the same approach that I do. I try to keep things simple and low-maintenance, so that even if the garden gets ignored, it won't look like nobody cares. And I don't plant anything too precious. 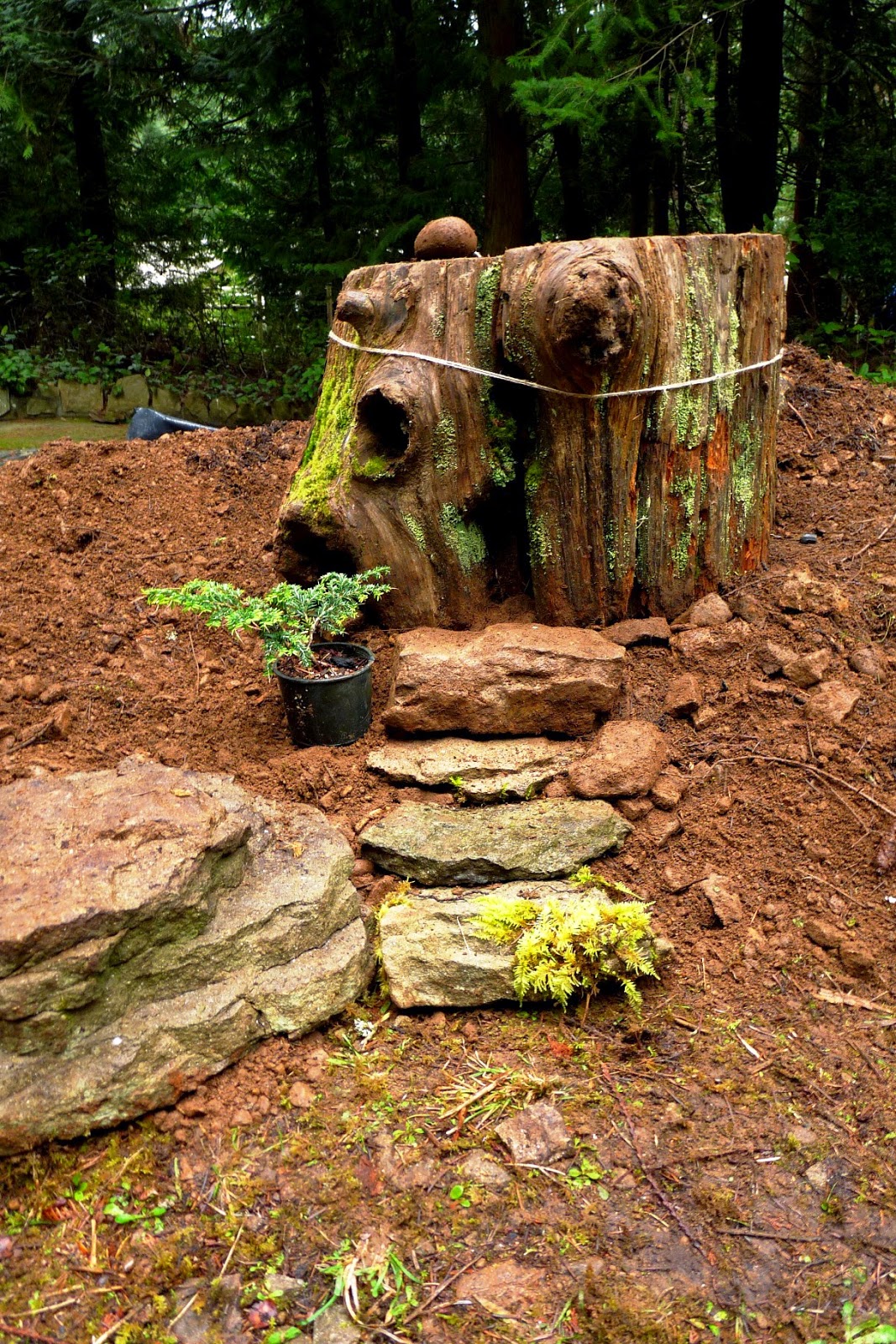 For the last month or so, I have been working on creating a garden in our much neglected back yard. Rather than getting a guy with a Bobcat to move the dirt and rock around, which could be done in an afternoon, I have chosen to take a slow, handmade approach. Needing a bit of a physical fitness program, I have been moving fill from a spot in front of the dome around to the back, bucketful by bucketful. I started with three buckets at a time, and added one more each day. Now I have stronger muscles, and a berm, ready to be landscaped with stones and this carefully placed stump. (More on the stump down a few paragraphs.)

Here's a shot of the space last fall: 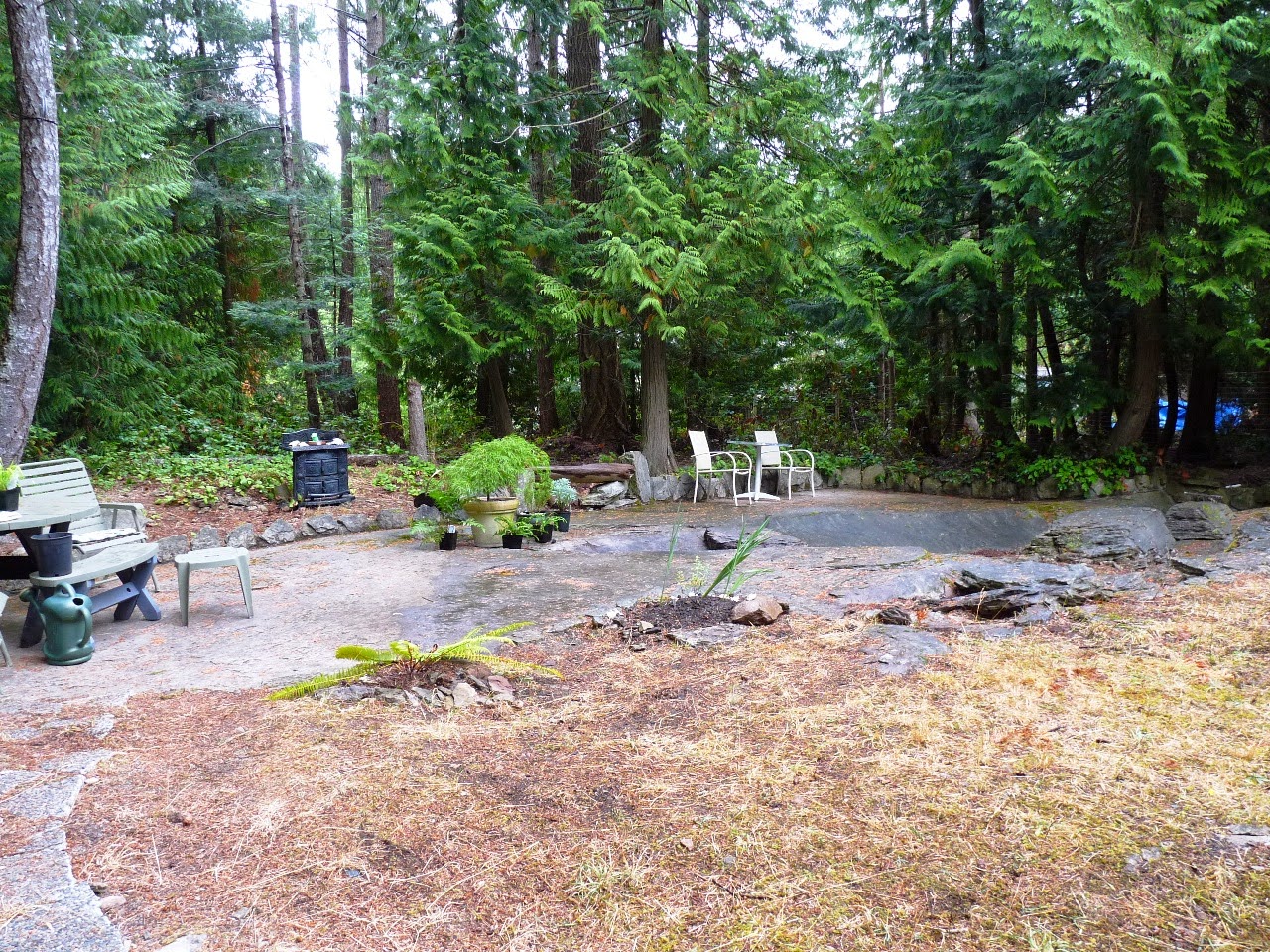 It is an unusual stone patio, carved out of the rock that is this island. At one time, someone had a vision. There are still the remains of pipes which makes me think there was a pond or a water feature. Over the years, it fell into neglect, and when we moved in, was filled with garbage and ashes from the outdoor fireplace. The first thing I did was buy a Japanese maple and some native coastal plants in pots at an end-of-season sale. They have huddled together over the winter. 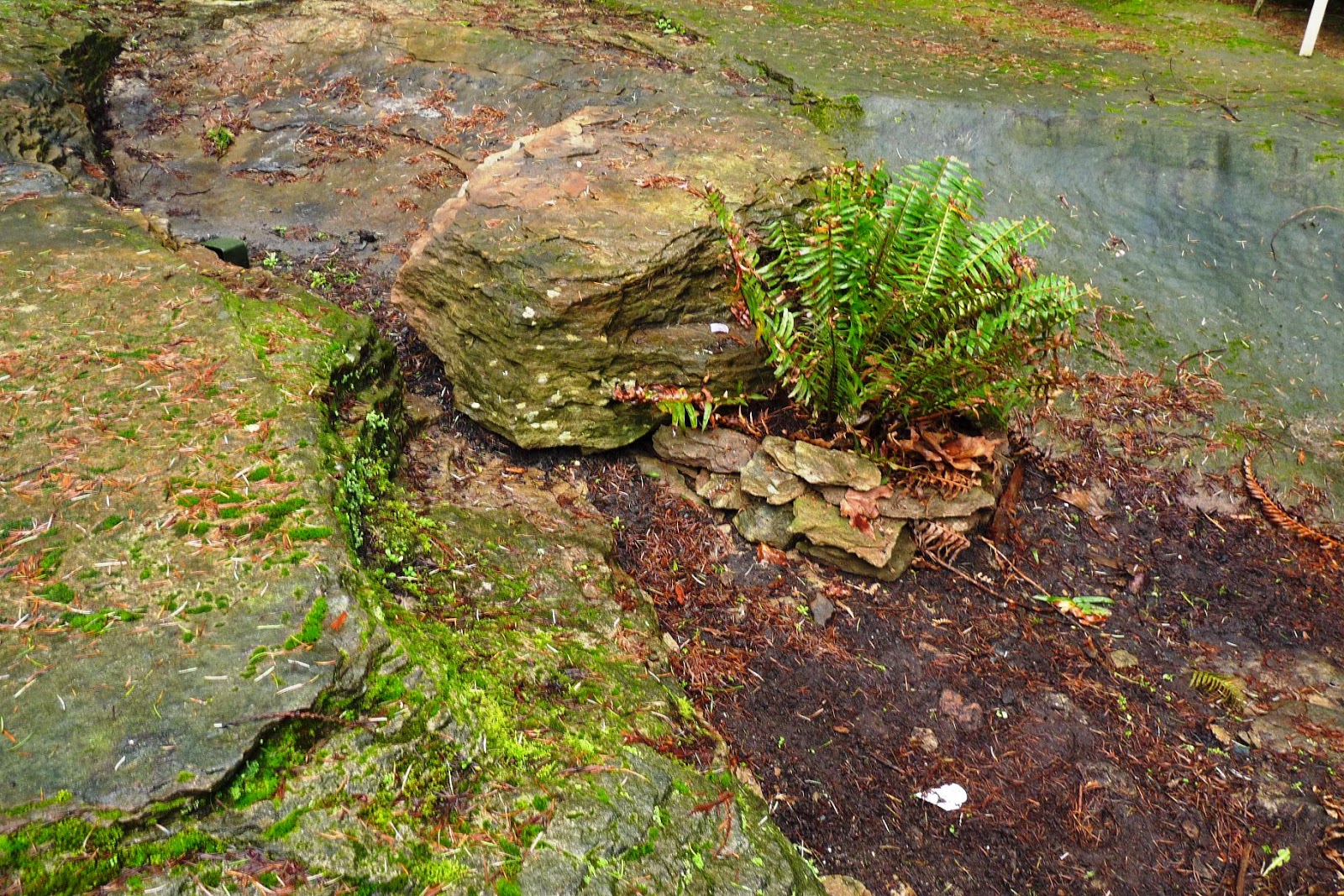 In January, I started removing the garbage and accumulation of weeds. I dug up sword ferns from the side of the road, where they do not thrive because the road crews mow them back several times a year, and created pockets to plant them in. 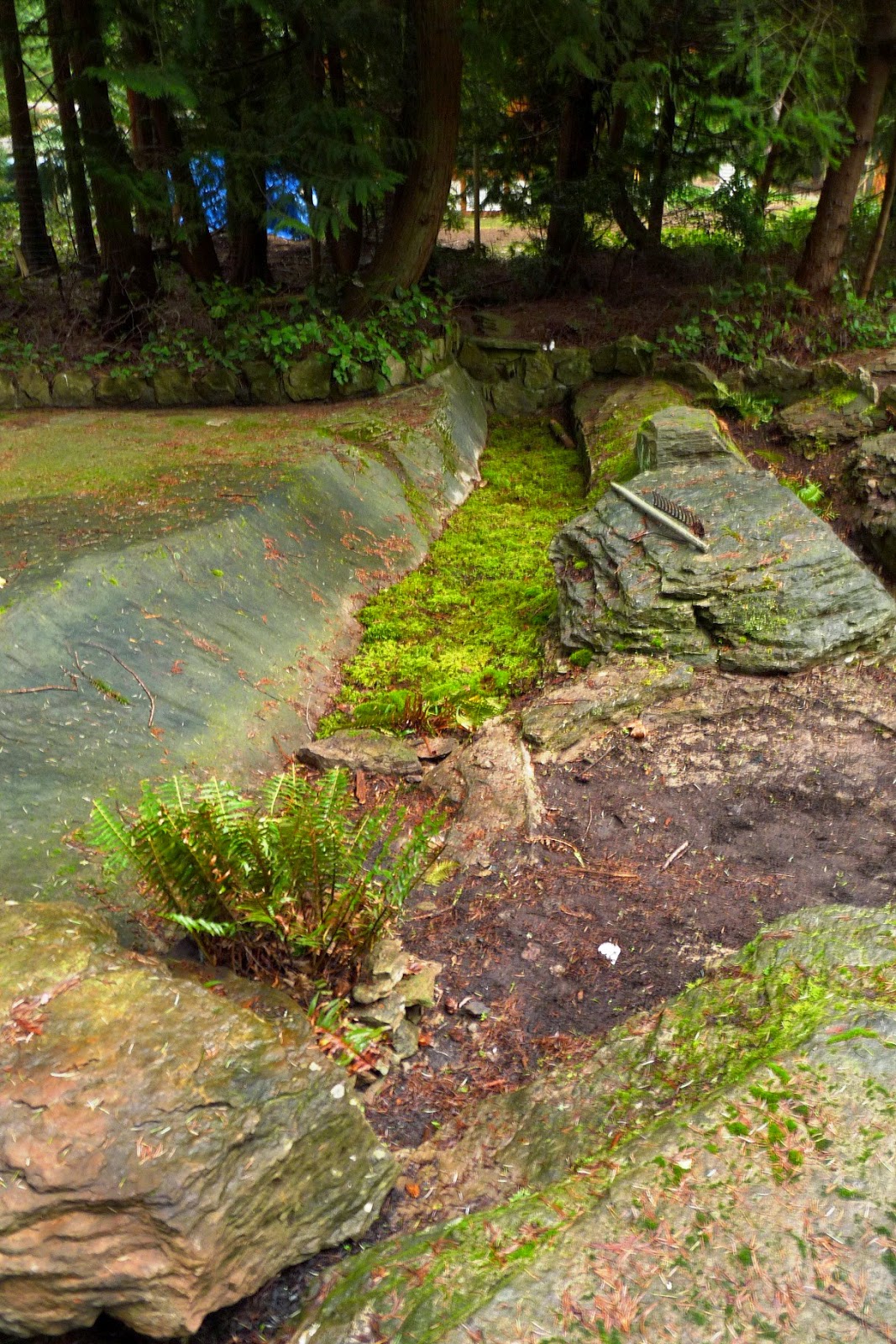 I collected a handful or two of moss from the forest every time I took the dogs for a walk, being careful to take only from areas where it was abundant and would be able to fill in quickly. I placed the mosses to create a green carpet on the deepest, shadiest trough in the stone. 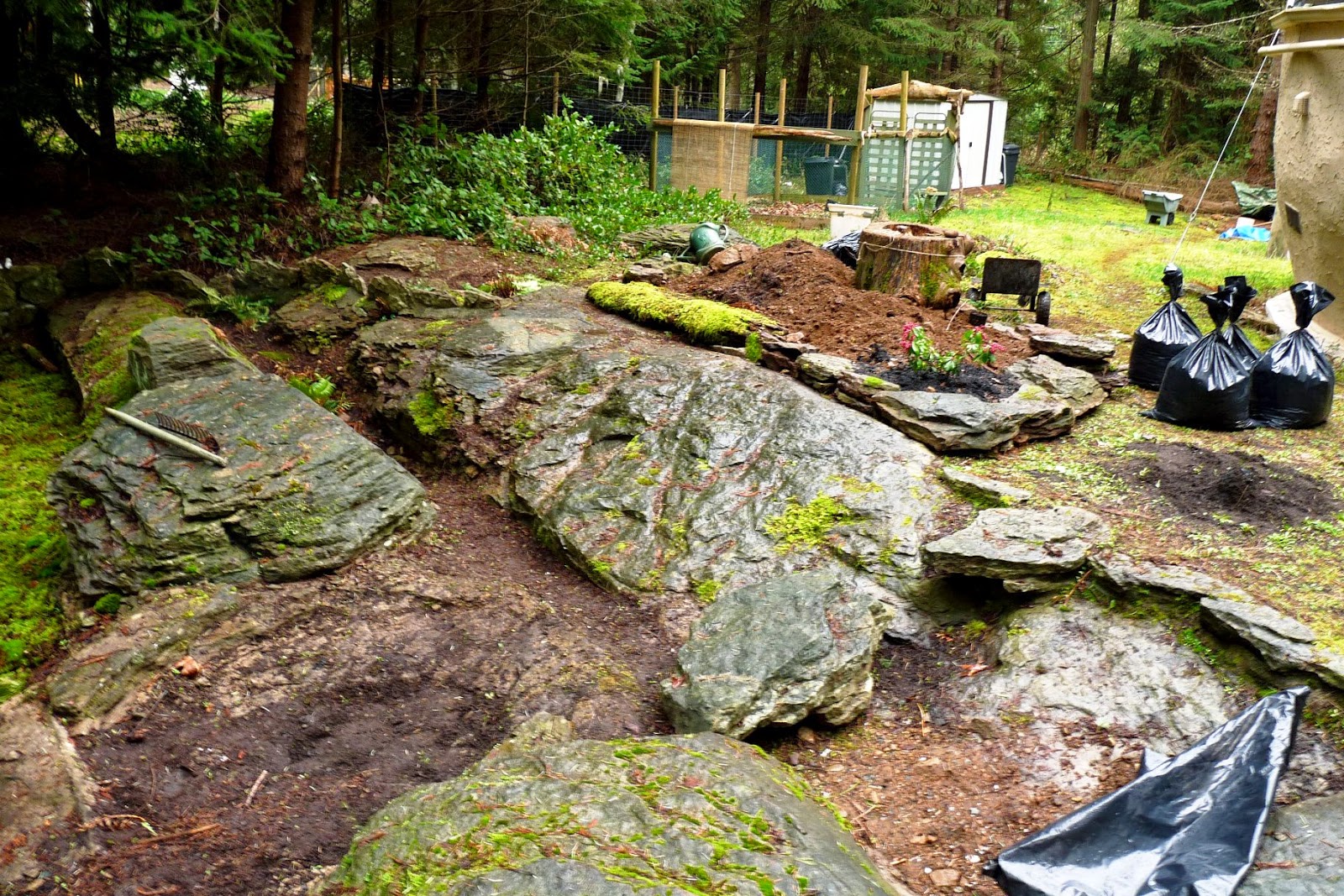 Above is the area of the berm. It doesn't look that big, but is enough! It's probably close to a cubic yard of subsoil and gravel. I then started placing stones around the edges to contain the soil and ease the transition between patio and yard, like I did below, last fall at the top of the driveway. (This was another area that was junky looking and full of debris before I began.) 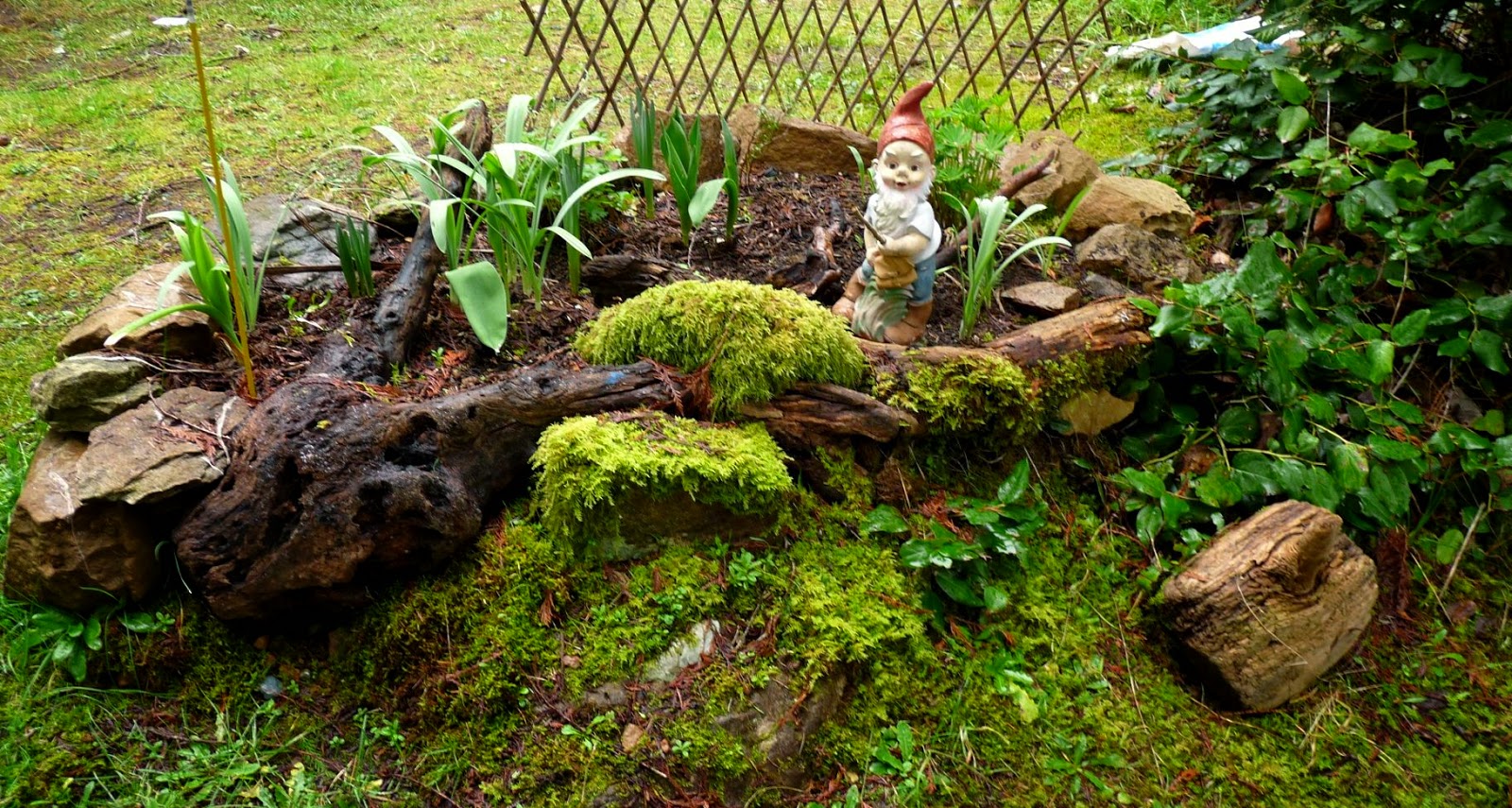 And I was thrilled to finally score the rotting stump that I had my eye on for the last few months. It had been sitting forlornly in the middle of a closed off road after somehow being moved from its long-time home at the side of the road. I liked its shape, and the moss growing on the side of it, and the fact that it was already somewhat hollow, making it suitable as a planter. But how to get it the 500 yards or so down a steep, eroded, blocked off road?

I figured that if I drove to the closest access point at the bottom of the hill, and took the moving dolly (hand truck), I could use the powers of leverage and gravity to get it close enough to the van that I could womanhandle it in. This kind of worked, although I grossly underestimated the weight of the stump and wasn't able to get the dolly under it. I rolled it, hand over hand down the slope until it decided to take off on its own, coming to rest at the bottom of an embankment. This journey split the stump in two, which wasn't a disaster since it meant I could then use the dolly, which I did in two trips.

Funnily, whilst I was doing this, a truck came along the main road and slowed to a crawl, giving me and my vehicle the hairy eyeball. It crept past and turned around, stopping behind the van. "Busted!" I thought, but it moved on before I reached the road. Probably phoning in my plate number to the authorities. I imagined explaining myself to the RCMP, but realized that there could only be one reason for a grey-haired lady rolling a chunk of rotting wood down a hill: Gardening! She has a vision... 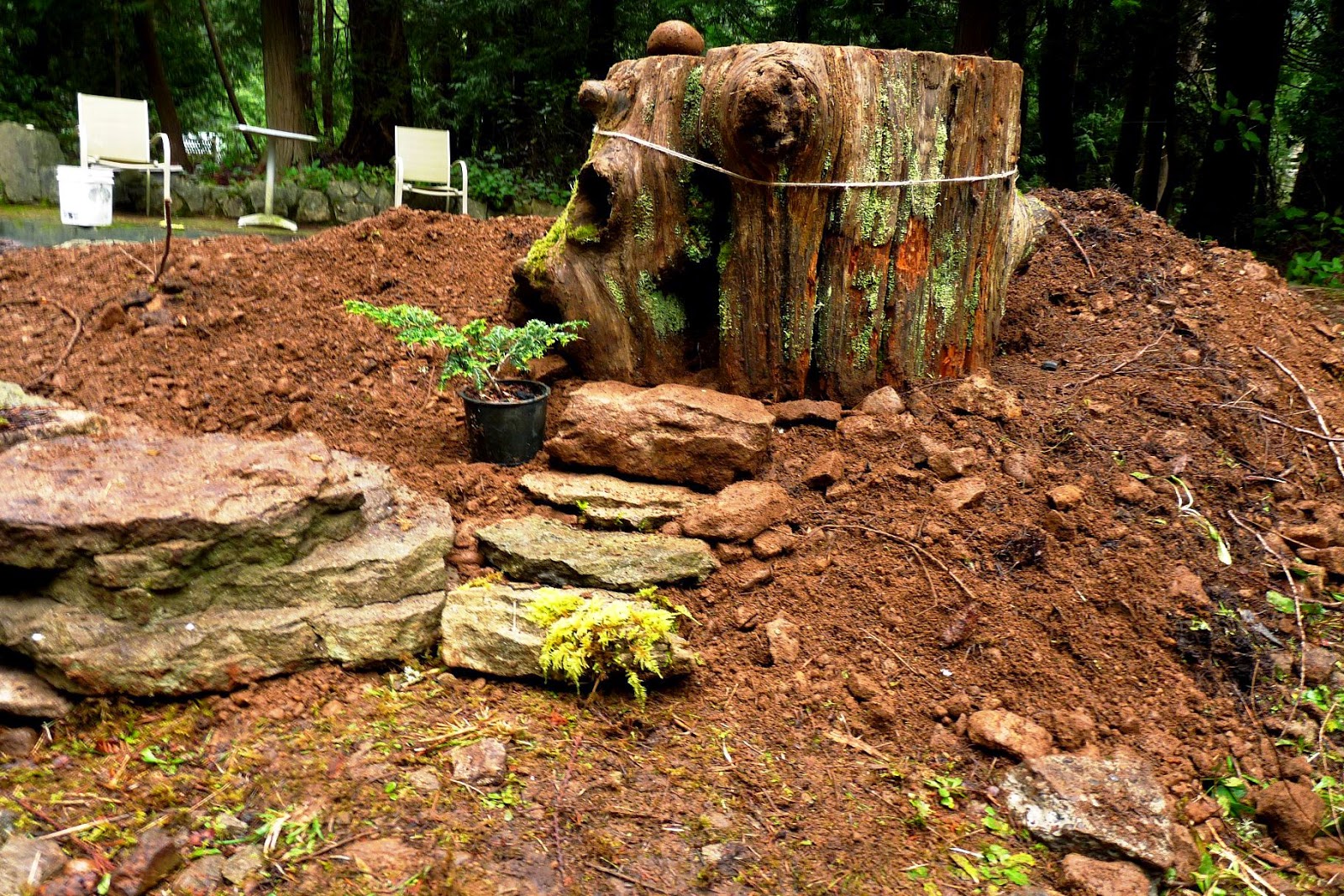 ...I positioned the stump three times before getting the right angle. There was a natural opening that looked like a fairy doorway, and there's even a pair of round little windows on the side. This inspired me to use some smaller flat rocks to create some steps up to the door. I will plant the miniature pine tree in a little pocket of soil by the door. The twine that is holding the stump together will have to be replaced with something unobtrusive and natural looking, and I may build a tiny little door sometime in the future but in the meantime I am thoroughly charmed. I will plant a needlepoint ivy in the top hollow for a cascading green roof.